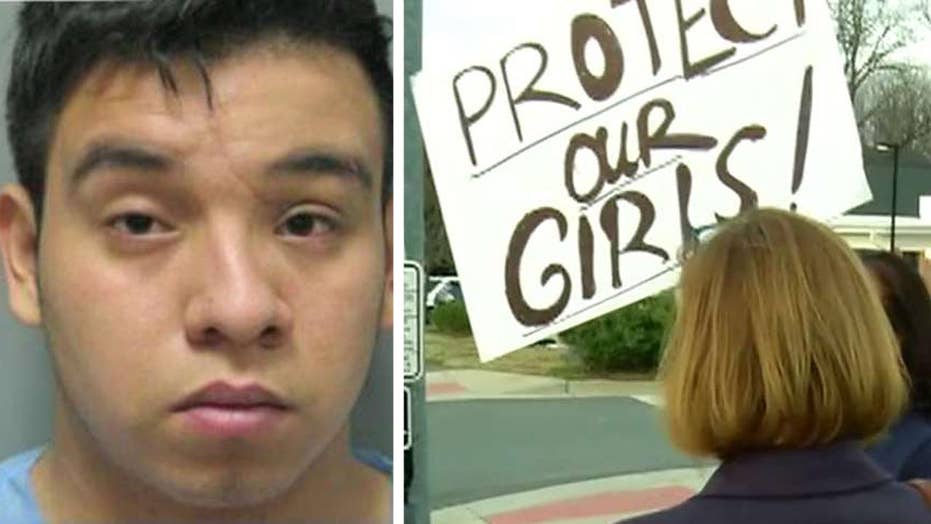 Doug McKelway has the details

The rape of a 14-year-old girl inside a Maryland high school, allegedly by at least one much older illegal immigrant, is stoking anger but having little effect on local politicians committed to so-called "sanctuary" policies.

Parents of students at Rockville High School, where the victim was brutally assaulted in a boys bathroom by two immigrant classmates, ages 17 and 18, vented at a PTA meeting Tuesday night.

"I'm very mad. I can't believe this is happening in my kids' school,” said a parent who identified herself only as Liz. “There are a lot of people here that maybe don't belong here. They haven't been checked out and I really need to know that my kids are safe."

“I know that if this country enforced the laws that are already on the books those two young men would not have been here and this rape, this horrendous rape, would not have occurred."

Residents of the Montgomery County community told Fox News the suspects have no place in classrooms with children several years younger. Illegal immigrants with language deficits are typically placed in lower grades at public schools in sanctuary communities around the country.

“I know that if this country enforced the laws that are already on the books those two young men would not have been here and this rape, this horrendous rape, would not have occurred," said one local parent.

Said another: "I'm really outraged by the situation in Montgomery County, I'm a lifelong resident."

Most seemed unmoved by school officials' defense of the policy of not cooperating with federal immigration officials.

"This is not an issue that we're going to move to the political level, although a lot of people want to do it,” said Jack Smith, superintendent of Montgomery County Public Schools. “The fact is, these students were not in the same class, but many students between the 9th and 12th grades are in the same classes, in the same band class, in the same world language class, same play after school."

Robin Ficker, an attorney who attended the meeting, said officials do not seem to grasp the situation.

“The mood was simply, 'cover our reputation,'” Ficker said. "There were long speeches from the principal, from the superintendent, from others who were associated with them explaining why this could never have happened when it did. An ounce of prevention is worth a pound to cure it.”

The community is one of several in Maryland considering formal adaptation of sanctuary status, a designation marking varying degree of non-cooperation with the federal Immigration and Customs Enforcement agency.

At least one of the suspects in the attack last Thursday, 18-year-old Guatemala native Henry Sanchez, had been stopped by a Border Patrol agent in August 2016 in Rio Valley Grande, Texas, when he entered the country illegally from Mexico. Sanchez was ordered to appear before an immigration judge, but the hearing had not yet been scheduled.

The immigration status of the other suspect, identified by police as Jose Montano, 17, of El Salvador, was not clear.

“You have young adult males that really do not have our culture and you are putting them in the same classroom as our 14-year-old girls and they are saying, 'There is nothing we can do about that – sorry,'” said community member Theresa Rickman.

Asked by Fox News why Montgomery County actively cooperates with Federal authorities on illegal immigration only after a crime has been committed, Montgomery County’s Council President Roger Berliner replied, “One of two individuals was stopped by ICE in Texas and released. How is this on us?"

That attitude did not sit well with critics of the sanctuary policy.

“The smugness and disingenuous language being used by Berliner is heinous,” said Jeff Werner of immigrant watchdog group Help Save Maryland. “Blaming ICE (Immigration and Customs Enforcement) for letting the illegal immigrant stay in the country [is] almost as if they are sidestepping the whole problem by saying, ‘We welcome everyone, regardless of their immigration status.’ They don’t even know if these illegals even have a crime record."

“We do not conduct background checks on any of our students. There is no provision in the law for that,” said Montgomery County Public Schools spokesperson Gboyinde Onijala, “We have students in our district that are US citizens that commit crimes and/or come to our schools with criminal records.”

When asked why the school district is resisting calls to examine its policies with regards to illegal immigrants, Onijala turned on the questioner.

“The U.S. Supreme Court… requires that schools not take any action that may discourage participation or exclude students based on their immigration status," Onijala said. "It is appalling that Fox News and others are insisting on making this a conversation about immigration when the focus should be on the victim… This is a crime that could be committed by anyone—white, black, Asian, Hispanic, documented and undocumented.”