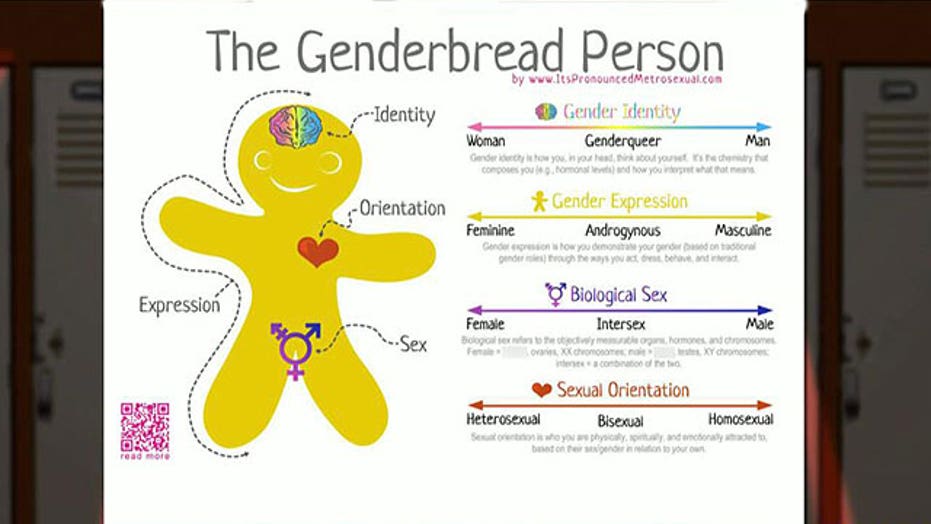 Students at one northern California high school are learning more than just the birds and the bees.

Along with local area groups, some parents are irate that their children’s sex ed class at Acalanes High School in Lafayette is being taught by employees of Planned Parenthood without their prior knowledge. They are also fuming over the methods and materials being used, including a checklist that asks students if they are “ready for sex” and another worksheet that describes how to give and obtain consent, as well as a diagram that uses a "genderbread" person for lessons in gender identity.

“[Parents] are very concerned,” Brad Dacus, president of the Pacific Justice Institute, a non-profit legal organization that is assisting the concerned parents, told FoxNews.com. “Planned Parenthood is not exactly the best when it comes to putting young people first.

“They get more grants from the promiscuity of children,” he added. “The material they have provided was material that mirrored their agenda.”

It was the parents of ninth-graders at Acalanes that started raising questions after their children told them one instructor threw a model of female reproductive organs at one student and that many felt the sessions were pressuring them to have sex.

“Some of the kids were distracted because it was divergent from what they were taught at home,” Dacus said.

Acalanes Union School District officials told the institute the class was not taught by teachers but rather the staff from a local Planned Parenthood in nearby Walnut Creek.

Included in the materials provided to students were documents and worksheets that included a checklist entitled, “Sex Check! Are You Ready For Sex?” in which the 13 and 14-year-old students are asked questions such as if they have water–based lubricants and condoms and if they could handle a possible infection or pregnancy. Another worksheet reads like a how-to on obtaining consent from a possible sexual partner and offers possible statements like “Do you want to go back to my place?” and “Is it OK if I take my pants off?”

They were also taught about gender identity with the “Genderbread Person,” a play on the name of the holiday cookie, to teach them on how to identify themselves as either, “agender,” “bigender,” and “two spirit” to name a few.

“Our daughter took this course two years ago, after being provided the opportunity to opt out of the class,” John Lyons, whose two children attend AHS, told FoxNews.com. “The opt-out form provided a handful of bullet points about what the course would cover. After completing the course, it was apparent that some of what was ‘taught’ went beyond what was represented on the opt-out form. This is disappointing to us, because we are actually strong supporters of teen sex education in a peer environment to complement our home-based discussions.”

Lyons added that he and his wife were dismayed by how the students were instructed. He said valuable and factual information was delivered in a manner that seemed to promote Planned Parenthood's agenda regarding 'social justice' through sex education of teens.”

Officials for the Planned Parenthood’s Northern California region did not respond to requests for comment.

Parents in the district have started a petition that has garnered over 100 signatures and have asked that AHS provide a sex ed preview course offered live to parents by the same person who teaches the kids, prior to their taking the course, to give parents the full disclosure and knowledge necessary to make an informed decision regarding their child's participation. So far, the school has not responded to their requests. They are also asking for the school system to develop and implement their own curriculum.

The Pacific Justice Institute has warned Acalanes Union High School District it may be in violation of the law.

“We have not seen any documentation to indicate that distribution of the surveys complied with either Federal law of the California Education Code as to parental notification,” reads a section of PJI’s letter, citing that a federal amendment on the protection of pupil rights states that schools must acquire written parental consent before a student is required to participate in surveys, analysis, or evaluations.

The also reference a California education code that contains the same requirements.

“Notably, the law does not merely require notice; it requires specific parental permission for this type of survey to be administered,” reads the letter.

Officials for the Acalanes Union High School District did not immediately respond to requests for comment.

A number of parents are expected to come out in force to a public district meeting on Wednesday to demand that their concerns be addressed.