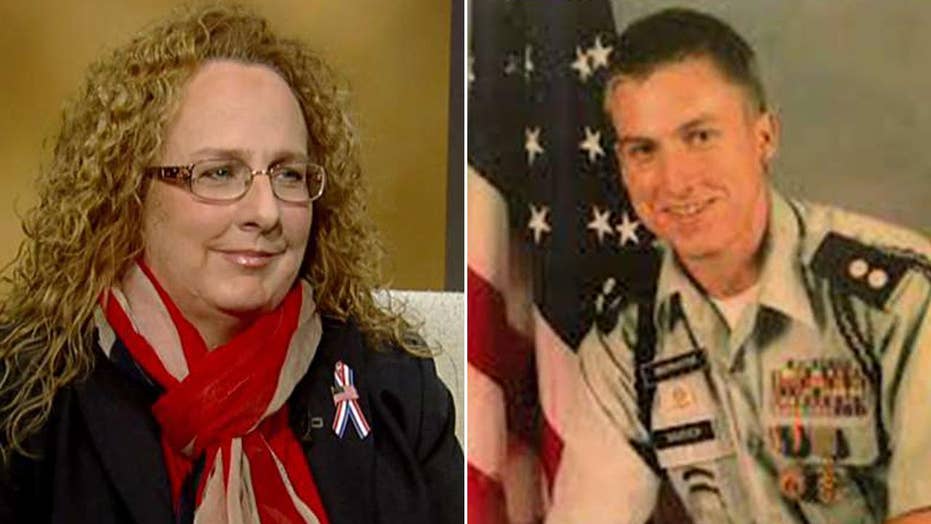 Mother of jailed sailor has a plea for President Trump

Kathleen Saucier shares her message for the president

A former Navy sailor imprisoned for taking photos inside a submarine has sought a pardon from President Donald Trump, who, as a candidate, often cited his case as unjust.

Kristian Saucier with his daughter, Kassy, and wife, Sadie (Courtesy of Ronald Daigle)

“It was a hyper-charged political atmosphere,” Daigle said, “politics played a role in it.”

Saucier, who served as a machinist's mate aboard the USS Alexandria from 2007 to 2012, used his cellphone to photograph parts of the submarine's nuclear propulsion system while it was docked at the Naval Submarine Base in Groton, Conn.

Saucier, who is married and has a 2-year-old daughter, began his 12-month sentence in October at the Federal Medical Center at Fort Devens, Mass.

He was convicted of unauthorized retention of national defense information, which is a felony, and received an "other-than-honorable" discharge from the Navy. He faced a possible 10 years in jail, his lawyers said.

His problems began when a worker at the naval base found Saucier’s cellphone near a Dumpster and, while going through it, found the photographs. The worker brought the cellphone to a retired Navy petty officer, who then notified federal agencies about the sensitive submarine pictures.

“When you look at how many years ago this occurred, coupled with his military service, and other individuals such as Hillary Clinton and [Clinton aide] Huma Abedin, who clearly mishandled classified information, it’s unfair,” said Greg Rinkey, one of the attorneys who represented Saucier. “It smacks of two types of justice systems in the United States.”

Abedin was a Clinton adviser whose estranged husband and former congressman Anthony Weiner was found to have some of the former secretary of state’s emails on his computer when it was seized by federal investigators in connection to another case.

Daigle said that when he served as a military police officer in Iraq from 2005 to 2006, he saw “hundreds, or thousands” of photos that service personnel had taken that could be considered sensitive. The norm was to handle them in-house, Daigle said.

Saucier’s family has said that he took the photos to show his future children what he did aboard the submarine.

Tom Carson, a spokesman for the U.S. Attorney in Connecticut, declined to comment on Saucier's attorneys' criticisms that prosecutors were overzealous.

Carson said in an email to Fox News: "For any pardon application, when the Office of the Pardon Attorney requests our office's position on a pardon, we will review the application and provide our position."

At the time of the court proceedings on the charges, prosecutors balked at attempts to compare the petty officer’s actions to those of other officers or even that of Clinton.

Noting that intent is crucial when determining punishment, some experts noted that Clinton maintained that she did not know that she was doing anything wrong, whereas Saucier conceded that he believed he should not have been taking the photographs.

Acting on behalf of the Navy, Rear Adm. Charles Richard submitted a victim impact statement that described Saucier’s photographs as having “had far-reaching consequences for the United States and the Officers, Sailors and families who serve it."

"Therefore, the Navy respectfully requests that the court consider a sentence of confinement, and a fine, at the high end of the applicable range under the U.S. Sentencing Guidelines," Richard said, according to Military.com

Daigle says that the photos he saw while in Iraq, where he had customs duty and had to go through belongings, “were far worse” than Saucier’s photos.

He said that Saucier had an outstanding career, and had wanted to be in the service for the long haul.

“Kris was an absolute great performer who made rank quickly because he did so well,” Daigle said.

Daigle hopes that Saucier receives a pardon that would erase the conviction from his record, and commutation of his sentence.