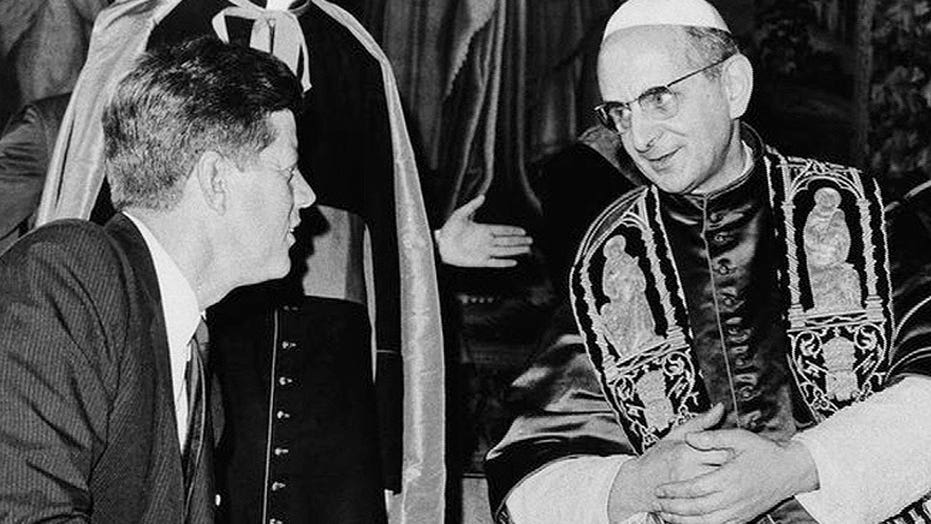 A look at the history of papal meetings with US presidents

Shortly after the end of World War I, President Woodrow Wilson met Benedict the 15th

When Pope Francis alights on U.S. soil Tuesday, will he start rapping capitalist American on the knuckles for not doing enough to help the poor or adopt a more pastoral approach similar to the other three pontiffs who have visited America before him?

No one expects the 78 year-old pontiff to the launch rhetorical grenades like those in some of speeches during his July trip to Latin America, including the assertion to Bolivian civil workers that “unfettered capitalism is the dung of the devil.” But few expect the Argentine pope to stray far from his core message that man must stop worshiping money and focus on the care of the poor and of the environment.

“In America, Pope Francis is going to challenge everybody – liberals, conservatives, Republicans and Democrats..he's going to have uncomfortable messages,” predicts Papal biographer Austen Ivereigh, author of "The Great Reformer, Francis and the Making of a Radical Pope."

“In America, Pope Francis is going to challenge everybody – liberals, conservatives, Republicans and Democrats..he's going to have uncomfortable messages.”

“Why?" continued Ivereigh. "Because he is speaking from the point of view of the poorest and those from the least developed countries and bringing it to the world's wealthiest nation. So it is going to be tense, but at the same time he's going to be reaching out beyond all these boundaries of left and right and speak to people's hearts and minds, which he does better than any politician around.”

A pointed message promoting charity over greed could offend some of the faithful, who regard the U.S. as not only the most successful country in the world, but also the most generous. On the papal flight from Latin America in July, a journalist asked Pope Francis if he was aware that his severe admonishing of the global economic system and the profit mentality was perceived by many Americans as a direct critique of their way of life.

Pope Francis called "unfettered capitalism" the "dung of the devil" during his trip to South America. (The Associated Press)

Pope Francis seemed a bit taken aback by the question, and admitted that he had heard there was some criticism but had not had time to really delve into it. “I haven't had time to study this well, because every criticism must be received...and then dialogue must ensue.”

Later another journalist asked why he spoke of the poor and often severely of the rich but never about the middle class. The Pope thanked him, saying it was an “error” on his part, but added that the world has become so polarized, with the middle class shrinking while the number of poor is growing. He concluded by telling the journalist, “but you are right, I need to delve more into this.”

While previous popes typically vacationed in the mountains or at the papal estate outside of the city, Pope Francis has instead spent the past two months of the sweltering Roman summer preparing for “the dialogue that must ensue” during this historic trip, the longest and, as his spokesman called it, the "most complex" so far in his two and half year papacy.

The six-day trip to Washington, D.C., New York and Philadelphia will not only be a time for teaching, but also of learning for Francis, said one Vatican official, noting that this is the first time he has been to the U.S. When he gets here, “he will begin to see the difference between Wall Street and Main Street,” the official said.

“He will be seeing in the U.S. one of the best educated, most active and generous Catholic churches around the globe,” the official said.