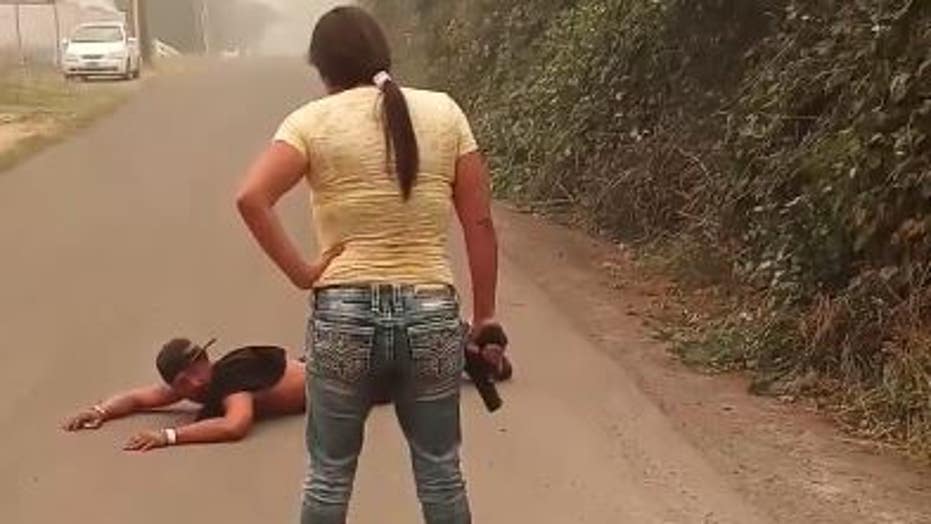 An Oregon woman was captured on video holding a suspected arsonist at gunpoint on Saturday after she allegedly caught him on her property carrying only matches.

The woman, Kat Cast, can be seen in the video parking her car, grabbing a gun, and approaching the suspect as he is crossing a road.

“Get on the floor, right now, face down! What are you doing on my property?” Cast shouts at the man. “Did you light anything on fire?”

When the man tells her he was “just passing through,” she asks why he is holding matches. The man tells her the matches were for smoking, but he later admitted he had no cigarettes. Cast holds him at gunpoint until police arrive.

Amid accusations that the video was fake or staged, Cast wrote on Facebook that the incident “truly did happen and there is nothing fake about it.”

“I will tell you something though if I need to do this again to protect my family and my neighbors, I will in a heartbeat do it again, except this time I will not be as nice as I was.”

She declined to speak with anyone further about the incident.

The video came after weeks of devastating wildfires have raged up and down the West Coast. In Oregon, looters and thieves have compounded the tragedy as residents try to evacuate from active fire fronts and law enforcement staffing is already on short supply.

Wildfires raging across the state have burned more than 1,300 square miles. At least eight people have been killed.