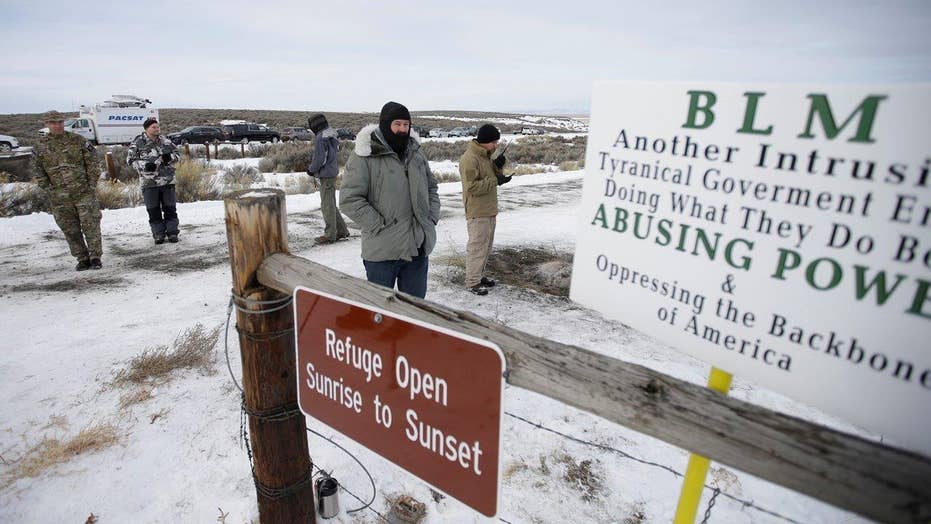 An Oregon sheriff said Tuesday that steps are being taken to end the occupation of a national wildlife refuge building by armed protesters.

Harney County Sheriff Dave Ward told the Oregonian “things are being done” that are not visible to the public. Ward said he hopes to reassure the public that authorities aren’t sitting back while the group controls the building.

Ward told the paper that his main focus is to stem any potential threat of violence between the community and the militiamen.

"It takes only one unstable person to show up with a skewed belief window to create something that can't be taken back," Ward added.

Government buildings and area schools were closed this week as a precaution. Ward said the closures will give authorities more time to assess the situation in Burns. Schools are slated to re-open next Monday.

The armed group took over the Malheur National Wildlife Refuge in eastern Oregon’s high desert country Saturday. The group hopes to influence the Bureau of Land Management to give government-controlled lands back to the locals.

Rumors of arrest warrants for five group members – including Ammon Bundy – have circulated, but the Harney County Joint Information Center said in a statement it had no information on arrests or arrest warrants and that authorities were “still working on a peaceful resolution.”

Bundy said they would take a defensive position anticipating a possible raid. Late Tuesday, the group moved a large plow vehicle to block the refuge's driveway.

Bundy told reporters Tuesday the group would leave when there was a plan in place to turn over federal lands to locals — a common refrain in a decades-long fight over public lands in the West.

"It is our goal to get the logger back to logging, the rancher back to ranching," said the son of Nevada rancher Cliven Bundy, who was involved in a high-profile 2014 standoff with the government over grazing rights.

The younger Bundy's anti-government group is critical of federal land stewardship. But environmentalists and others say U.S. officials should keep control for the broadest possible benefit to business, recreation and the environment.

Randy Eardley, a BLM spokesman, said the group’s call for land ownership transfer didn’t make sense because the people already own the land.

"It is frustrating when I hear the demand that we return the land to the people, because it is in the people's hand — the people own it," Eardley said. "Everybody in the United States owns that land. ... We manage it the best we can for its owners, the people, and whether it's for recreating, for grazing, for energy and mineral development."

The federal government controls about half of all land in the West, which would make the wholesale transfer of ownership extremely difficult and expensive.

For example, it owns 53 percent of Oregon, 85 percent of Nevada and 66 percent of Utah, according to the Congressional Research Service. Taking over federal public lands in Idaho could cost the state $111 million a year, according to a University of Idaho study.

Bundy said the group felt it had the support of the local community. But Ward has told the group to go home, and many locals don't want them around, fearing they may bring trouble. A community meeting was scheduled for Wednesday. Ward said in a statement the meeting was to "talk about [residents'] security concerns and the disruptions that the behavior of the militants on the refuge are causing for our people."

The group, which calls itself Citizens for Constitutional Freedom, has also said it wants an inquiry into whether the government is forcing ranchers off their land after Dwight Hammond and his son, Steven, reported back to prison Monday.

The Hammonds, who have distanced themselves from the group, were convicted of arson three years ago and served no more than a year. A judge later ruled the terms fell short of minimum sentences that require them to serve about four more years.

The takeover comes amid a dispute that dates back decades in the West. In the 1970s, Nevada and other states pushed for local control in what was known as the Sagebrush Rebellion. Supporters wanted more land for cattle grazing, mining and timber harvesting.