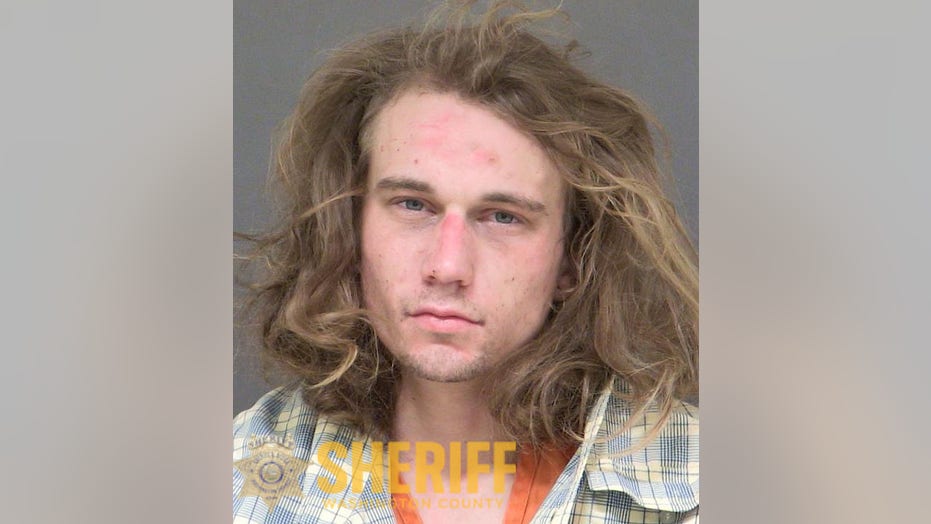 An Oregon man driving a stolen vehicle tried to run over a police officer while evading arrest on Monday, but was captured following an on-foot K-9 pursuit, authorities said.

A Hillsboro police officer used the LoJack tracking system in his patrol car to locate the stolen vehicle in the parking lot of an apartment complex just after 3:30 a.m. on Saturday, police said.

NEW JERSEY HIJACKER WHO USED BACKHOE TO FLIP POLICE CAR SHOT AND KILLED: ‘OUT OF A MOVIE’

When the officer walked up to the stolen car, he found 28-year-old Travis Johnson in the driver’s seat. John put the car in reverse, nearly hitting the officer, and struck the officer’s patrol vehicle while making his escape, according to authorities.

Travis Johnson, 28, was booked into the Washington County Jail on a slew of charges, including attempted assault and reckless driving. (Hillsboro Police Department)

Officers chased after Johnson, using spike strips on the stolen car twice and using a PIT maneuver to ultimately bring the suspect to a stop, police said.

Johnson ran from the scene into an area with thick brush in another attempt to evade capture, according to police, but officers continued to follow him. Police said that some officers suffered injuries from the brush.