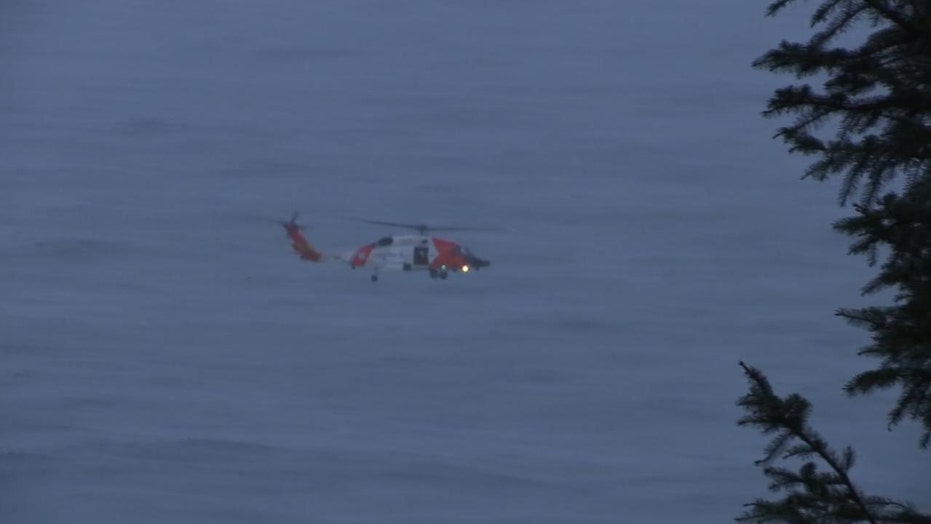 An Oregon man was holding his two young children -- a 4-year-old boy and 7-year-old girl -- when a ferocious wave crashed into them Saturday and swept them out to sea, police said.

The girl died, her brother was missing and their father was hospitalized and expected to survive, according to news reports.

It happened off the Oregon coast near Falcon Cove shortly before 1 p.m. Police responded to a 911 call from the children’s mother, Fox 12 Oregon reported.

OREGON POT SMUGGLERS RECORDED THEMSELVES REHEARSING KIDNAPPING, THEN CARRYING IT OUT

Photo shows Coast Guard helicopter searching for boy 4, who was swept out to sea Saturday near Falcon Cove in Oregon. (Fox 12 Oregon)

An officer who arrived at the scene found the father struggling to get out of the ocean and the girl further out in the ocean, Oregon State Police said.

“The officer went into the ocean and was able to get the juvenile female and bring her to shore,” police said.

The girl and her father weren't responsive, the station reported. The girl later died at the hospital.

The Coast Guard used a helicopter to search for the boy. By 6 p.m. the search was suspended without the boy being found, according to the station.

“Very rough conditions, rough enough that we couldn’t bring out any of our smaller boats,” Coast Guard spokesman Steve Strohmaier told the station.

The extremely rough surf attracted hundreds of onlookers to the Oregon shoreline on Saturday, the station reported.