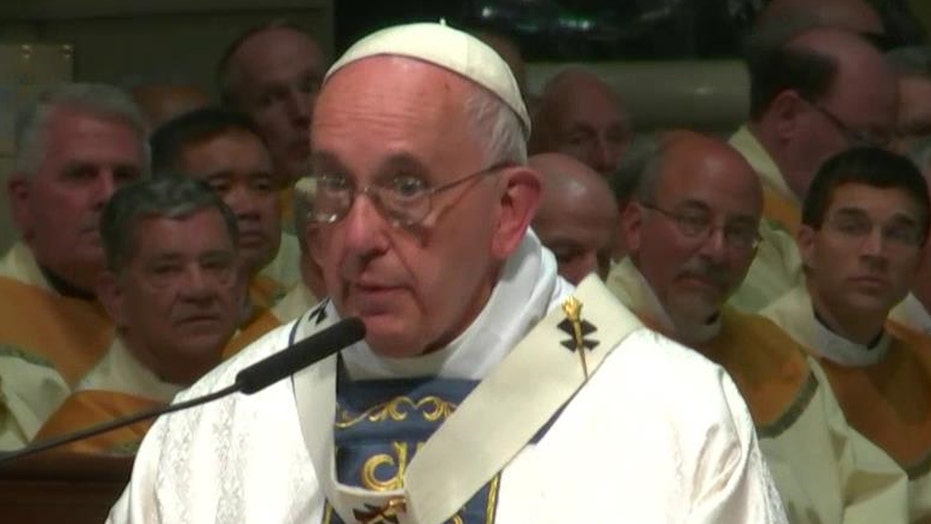 Says history of the city is about building communities, not walls

PHILADELPHIA – Greeted by throngs of cheering faithful at every turn, Pope Francis is capping his whirlwind visit to the United States in an entirely fitting way — Mass for the masses on Philadelphia's grandest boulevard — while also spending time with inmates at its largest jail.

The 78-year-old "people's pope," who seems to feed off the energy of the crowds, is expected to see the largest of his six-day tour on Sunday when he celebrates a climactic outdoor Mass on the Benjamin Franklin Parkway before flying back to Rome.

The Mass is the culminating event of a Vatican-sponsored conference on the family that drew the wildly popular pontiff to Philadelphia.

He'll begin his day by speaking to bishops from around the world before heading to Curran-Fromhold Correctional Facility, where he'll visit with 100 inmates — a cross-section of suspected killers, rapists, mobsters. He's expected to offer them words of hope, forgiveness and redemption.

"His mission is the marginalized, the forgotten," prison spokeswoman Shawn Hawes said. "From our understanding, he wants those who are in custody to know that they are not forgotten and they can be redeemed."

Prison ministry has been a hallmark of Francis' pontificate. He meets often with inmates and has washed prisoners' feet during pre-Easter rituals. He opposes the death penalty in all circumstances and has called for the abolition of life imprisonment and solitary confinement.

He had also been widely expected to talk privately with abuse victims this weekend and may do so Sunday. Cardinal Justin Rigali, the former Archbishop of Philadelphia who retired in 2011 amid a scandal over clergy sex abuse, celebrated Mass with Francis on Saturday.

The pope landed in Philadelphia on Saturday morning and celebrated a Mass for about 1,600 people at the Cathedral Basilica of Sts. Peter and Paul, saying the future of the Catholic Church in the U.S. requires a much more active role for lay Catholics, especially women. Francis has repeatedly said women should have a greater role in church leadership, though he has rejected the idea of ordaining women.

Later in the day, he extolled America's founding ideals of liberty and equality in a speech outside Independence Hall, where the Declaration of Independence and the Constitution were signed.

"Those ringing words continue to inspire us today," the pope said of the Declaration of Independence, "even as they have inspired peoples throughout the world to fight for the freedom to live in accordance with their dignity."

He cited the abolition of slavery, the growth of the labor movement and the fight for racial equality as proof that "when a country is determined to remain true to its founding principles, based on respect for human dignity, it is strengthened and renewed." He warned that religious freedom was under threat but did not mention gay marriage, abortion or government-mandated birth control coverage by name.

He decried "a world where various forms of modern tyranny seek to suppress religious freedom, or try to reduce it to a subculture without right to a voice in the public square, or to use religion as a pretext for hatred and brutality."

He also encouraged immigrants in the crowd of 40,000 to celebrate their heritage and traditions, and he assured them they are of value to America.

The birthplace of American democracy was turned into an armed and heavily fortified encampment for the pope's visit, with streets blocked off by metal fencing and concrete barriers, visitors passing through airport-style security checkpoints and thousands of police and National Guard troops on patrol.

Some feared the heavy security would scare people off, and, in fact, train ridership was lower than expected Saturday. Restaurateurs complained of empty tables.

But Francis was cheered by tens of thousands Saturday night at a music-and-prayer festival on the Parkway, waving to the crowd in his open-air popemobile. Performers included Aretha Franklin and Andrea Bocelli.

The program was trimmed after it ran more than an hour late and Francis ditched his prepared remarks to instead deliver an off-the-cuff monologue on families and God's love.

He called families a "factory of hope," even with their imperfections.

"Defend the family, because that's where our future will play out," he said.

Organizers have said they expect 1 million people to turn out Sunday for Francis' final Mass in the U.S., a nation the Argentine is visiting for the first time. At the Mass, six families — from Australia, Congo, Cuba, France, Syria and Vietnam — will receive Francis-signed copies of the Gospel of St. Luke. They'll get an additional 100,000 copies to distribute in their home countries.

He called Francis "the most inspirational and amazing pope that could breathe life into this church of mine. And I'm so grateful to have a leader like him who's so humble and such a true servant of God."

It's been a common sentiment throughout the pope's visit to Washington, D.C., New York and Philadelphia.

"It's the wave. It's the smile," said Tom Hambrose, 52, of Haddon Heights, New Jersey, attending the Festival of Families on Saturday night. "It's what he's articulating, that the church needs to step forward and needs to change its thinking about things."