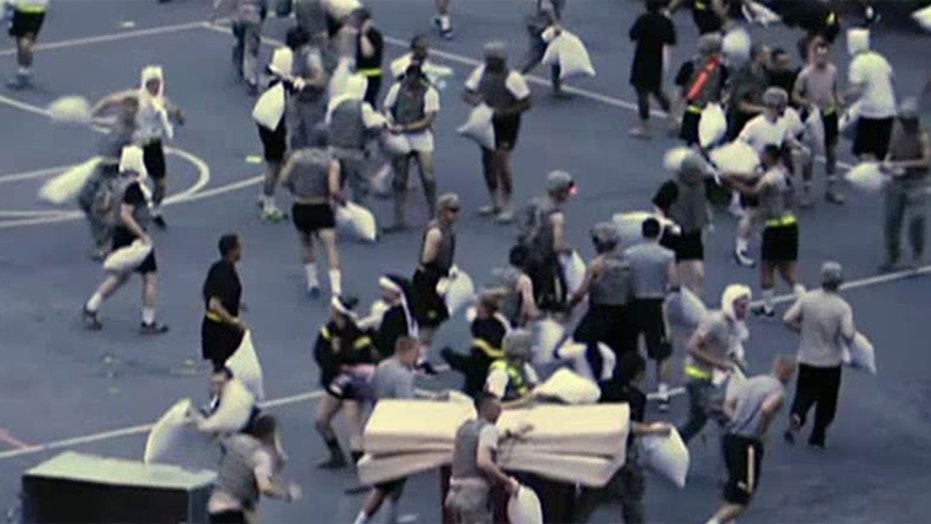 An annual pillow fight by freshmen cadets at the U.S. Military Academy turned bloody this year when cadets swung pillowcases packed with hard objects, injuring 30 cadets, including 24 who suffered concussions.

“While these spirit events do occur, we never condone any activity that results in intentional harm to a teammate,” Caslen said. “Although the vast majority of the class appears to have maintained the spirit of the event; it is apparent that a few did not.”

Photos and video have circulated on social media showing the Aug. 20 brawl, which The New York Times reported West Point did not confirm until Thursday.

Lt. Col. Christopher Kasker told the newspaper the annual fight is organized by first-year students as a way to build camaraderie after a grueling summer of training to prepare them for plebe life.

He said upperclassmen overseeing the fight required cadets to wear helmets, but video shows many did not. Some cadets swung pillowcases believed to be packed with their helmets.

Kasker said all cadets have since returned to duty. None of the participants have been punished.

FILE 2014: Members of the graduating class listen to proceedings during commencement ceremony at the United States Military Academy at West Point. (Reuters)

"We are conducting appropriate investigations into the causes of the injuries,"Kasker told the paper. The academy does not plan to end the annual tradition, the Times reported.

Caslen said Saturday that a military police investigation which began the night of the incident is “ongoing.”

The Times spoke to cadets who said one cadet suffered a broken leg and others suffered dislocated shoulders.

One first-year cadet told the paper that an upperclassman told him, "If you don't come back with a bloody nose, you didn't try hard enough."