Mountain Area Pregnancy Services executive director Kristi Brown weighs in on her crisis pregnancy center being vandalized in the lead-up to the Supreme Court's ruling on abortion on 'Lawrence Jones Cross Country.'

Dozens of pro-life centers have been targeted across the country since a leaked Supreme Court draft opinion signaled Roe V. Wade would be overturned in May, followed by the nation’s highest court ultimately ruling as such in June.

For one pro-life organization in Ohio, it has been targeted twice since last month.

"As pro-lifers, we know that our work might cost us something and that very well could be our physical safety," the executive director of the Right to Life of Northeast Ohio Allie Frazier told Fox News Digital. "I think that it's important in moments like this for the pro-life movement to be really clear that we're not going to be intimidated. We will save babies. We will protect women. And we're not going to let threats of violence stop us from doing that."

Offices for the Right to Life of Northeast Ohio were most recently targeted on July 8, Frazier said, when at least one suspect was caught on camera lobbing rocks at the building, breaking windows and spray-painting menacing messages. 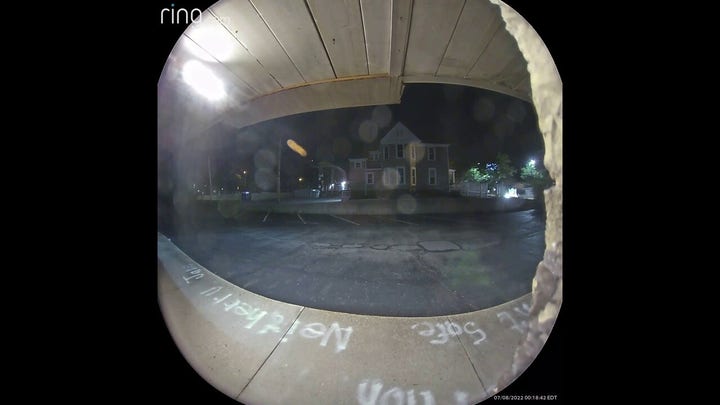 "If abortion isn’t safe, neither are you," the suspect, who was seen wearing a face mask, scrawled on the sidewalk of the offices. The phrase has been spray-painted at similar offices across the country, often by members of pro-abortion extremist group Jane's Revenge. 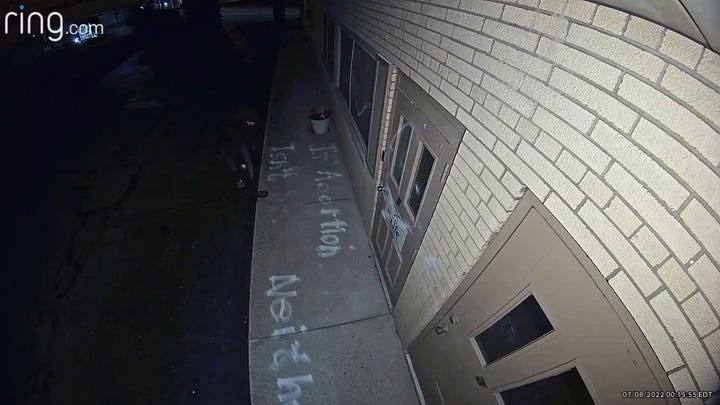 Frazier said it’s likely that Jane’s Revenge is behind this attack, noting that among other spray-painted messages, the name "Jane" was written on the ground.

"I think it would be easy for a situation like this to be a copycat scenario. But as far as I'm concerned, if any pro-abortion individual decides to take that next step, to take that bad step, and use violence against pro-lifers, that is something that I am going to work hard to protect my staff against," she said.

Frazier said that the damage caused by the vandalism was "significant," but "undoable," noting that repairs were being made to the broken windows as she spoke to Fox News Digital.

"I know that the intention of this attack was to stop us. It was to stop our peaceful activism. It was to stop the ways that we are impacting women and babies in this community for a positive. And they didn't even stop that. I was already back to work in my office within a few hours," she said.

It was the second time the offices were targeted, Frazier said. Activists posted pro-abortion posters at the office on June 24, the day Roe was officially overturned, hung a coat hanger on an office door knob, and rang a Ring security camera before flashing a middle finger to the camera, according to Frazier.

She said that the attacks pro-life centers have recently faced should "100%" be investigated as hate crimes.

"[Pro-abortion vandals] are not afraid of using violence to get what they want. This is absolutely a threat against the peaceful pro-life movement. And we do ask that law enforcement and local, state, and federal leaders continue to lead the way and say, ‘Hey, violence is never okay,’" she said.

Pro-life activists have repeatedly called on President Biden to forcefully condemn the attacks on pregnancy centers and churches, including Frazier who called on the president to not "be complicit in this violence."

"Regardless of how people feel on the issue of abortion, everybody should be able to condemn acts of violence against peaceful nonprofits. Whether that's an advocacy organization like Right to Life of Northeast Ohio, or a pro-life pregnancy center that are literally meeting the needs of women and babies in crisis," she told Fox News Digital.

The White House has previously condemned the violence at pro-life centers but has come under scrutiny for not doing more.

"Instead of supporting and defending more pro-life pregnancy centers that provide health care and support to women at every stage of life, President Joe Biden and the Left are working to dismantle the work of these amazing centers. They won’t strongly condemn the violence and threats pregnancy centers are facing," the Republican House Energy and Commerce Committee posted on Tuesday, demanding Biden "MUST condemn the violence and threats."

Dozens of pro-life centers have faced attack since May, including a pro-life Christian pregnancy center in Buffalo, New York, that was allegedly "firebombed," and a pregnancy center in Dearborn, Michigan, that saw every "window and door along the front face of our building" smashed.

Jane’s Revenge has taken responsibility for a handful of the attacks and declared "open season" on pro-life pregnancy crisis centers in a letter published last month.

"We offered an honourable way out," the letter read. "You could have walked away. Now the leash is off. And we will make it as hard as possible for your campaign of oppression to continue."

But to Frazier, the pro-life movement will remain unchanged and committed to protecting women and babies.

"We must be willing to do what it takes to protect women and babies and be ready to take any backlash from that. … Don't be afraid. We got this," she said of her message to pro-life Americans, adding that pro-lifers can also reach out to their local pregnancy centers to check in on staff and see if they need any additional resources.