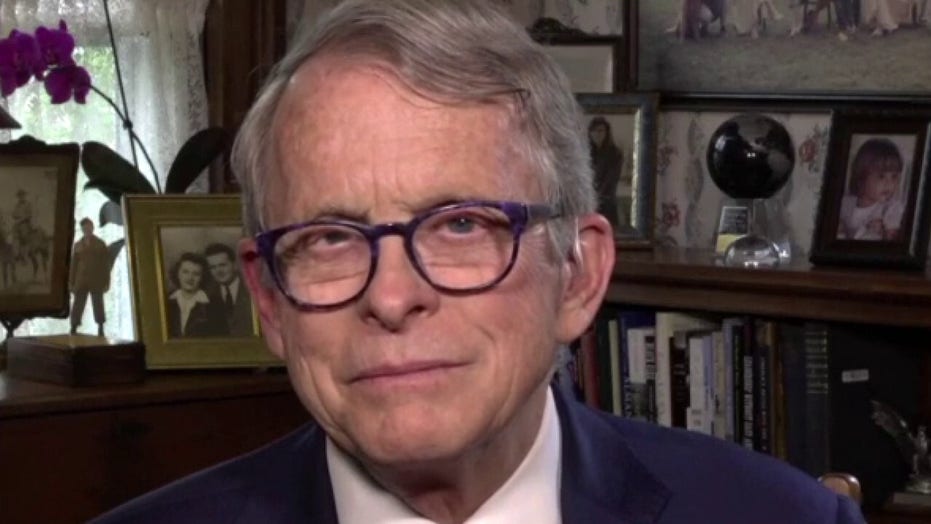 Chanting “Reopen Ohio!” a crowd gathered outside the Ohio Statehouse in Columbus on Friday, as Republican Gov. Mike DeWine was preparing for his daily news briefing on the coronavirus outbreak.

The demonstration came on the same day that Ohio surpassed 1,000 deaths from COVID-19 and reached more than 18,700 confirmed infections, FOX 28 of Columbus reported.

After some protesters attempted to open a Statehouse window, state troopers in riot gear were deployed and moved the demonstrators away from the window, the station said. No arrests or acts of violence were reported.

At one point, a protester outside the building confronted a masked reporter from Columbus station WCMH-TV who was covering the demonstration. Their clash was captured on a video posted to social media.

“‘Cause you know that the company that you work for is lying to the America people!” the unidentified protester shouts at the reporter. “And you know that what you’re doing is wrong, at the end of the day. You know it.

“You see how nervous you are? You’re shaking. You are sweating,” the protester adds. “Your glasses, you can’t even see out of them!”

“You’re terrifying the general public,” she says later. “You realize that?”

Someone eventually pulled the protester away before the confrontation could continue, Cleveland.com reported.

Afterward, the WCMH reporter, Adrienne Robbins, shared her remarks about what happened.

“I asked this woman to respect my space after she was yelling and spitting in my face,” Robbins wrote. “She said I had no right to social distancing in public and continued to follow me. Complaining about my mask (that is meant to protect her and those around me).”

Colleen Marshall, a colleague of Robbins’ at WCMH, praised the reporter “for staying calm” during the situation.

“This is not OK,” Marshall wrote. “One of our reporters, trying to do her job and maintain social distancing, confronted by a protester at the Statehouse. Proud of @ARobbinsTV for staying calm. You can judge the other person in this video.”

The protest in Columbus was among several across the U.S. this week as many Americans have been expressing frustration with stay-at-home orders and other coronavirus mitigation measures, many of which have been in effect for nearly two months. Some states and communities have already announced extensions deep into May.

Protesters gather outside of the Ohio Statehouse in Columbus, April 20, 2020, to protest a stay-home order that is in effect until May 1. (Associated Press)

The new order, in effect until May 29, is “not a stay-at-home order,” DeWine stressed at a Friday news conference. Instead, it’s a plan for gradually reopening the state, he said.

“We have reached a new stage” in the pandemic, DeWine said, according to FOX 28. “But it doesn’t mean the virus has gone away.”

Under the plan, according to FOX 28, health care facilities that perform nonessential surgeries and dentist and veterinarian offices were permitted to reopen Friday.

On May 12, retail stories will be allowed to reopen, the governor added. But until then they may take orders for curbside pickup.

He added that advisory groups are considering reopening plans for restaurants, hair salons, live sports, libraries, gyms and other businesses.