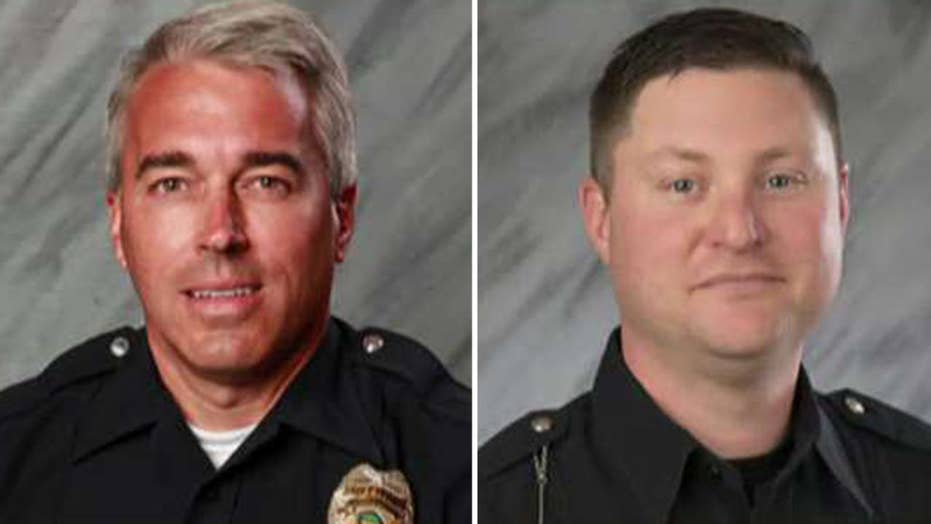 Makeshift memorial set up for the fallen officers.

COLUMBUS, Ohio – The man accused of fatally shooting two Ohio police officers responding to a hang-up 911 call was indicted Friday on charges that carry the possibility of a death sentence.

Quentin Smith, 31, fired on the officers from Westerville in suburban Columbus on Feb. 10 as they entered his town house, according to authorities. Smith was shot and wounded and hospitalized for several days.

An arraignment was scheduled Wednesday for Smith, who has yet to enter a plea. A message was left with Smith's attorney seeking comment.

The case is eligible for the death penalty because police officers were killed in the line of duty and also because more than one person was killed.

"I can't think of a more serious case than the murder of two officers in the line of duty," said O'Brien, the county's long-serving Republican prosecutor. "We live in a civilized society. Those first responders are the ones that keep you and me safe daily."

Westerville police officers Eric Joering, 39, died at the scene, while Anthony Morelli, 54, died at a local hospital. Records show police went to Smith's townhome where he lived with his wife, Candace, for domestic disputes three times since September, and neighbors said they frequently fought.

After the shooting, 911 calls showed Candace Smith was hiding in bushes in front of the home, pleading for help because her daughter was still inside the home.

Smith had a criminal history in Cleveland, and in 2009 was sentenced to three years in prison on a burglary conviction out of Cuyahoga County with an added enhancement of having a gun. He left prison in 2011 and was released from parole, called community control in Ohio, in November 2013, according to the Ohio Department of Rehabilitation and Correction.

As a felon, Smith wasn't allowed to have a weapon. Authorities say a close friend of Smith's sold him the gun used in the fatal shooting in the summer of 2017.

OHIO COUPLE CAUGHT HAVING SEX IN FRONT OF KIDS AT PLAYGROUND, COPS SAY

Hundreds of people crowded St. Paul Catholic Church in Westerville for the officers' Feb. 16 funeral, and hundreds more police officers from around the country rode police vehicles in a procession afterward that stretched 6 miles through Westerville and lasted for hours.

The officers were the first ever killed in Westerville, a suburb of about 39,000 with a per capita income well above the rest of Ohio. It regularly tops lists of the country's best suburbs. It's home to Otterbein University, a liberal arts college. Republican Gov. John Kasich lives in a nearby township.