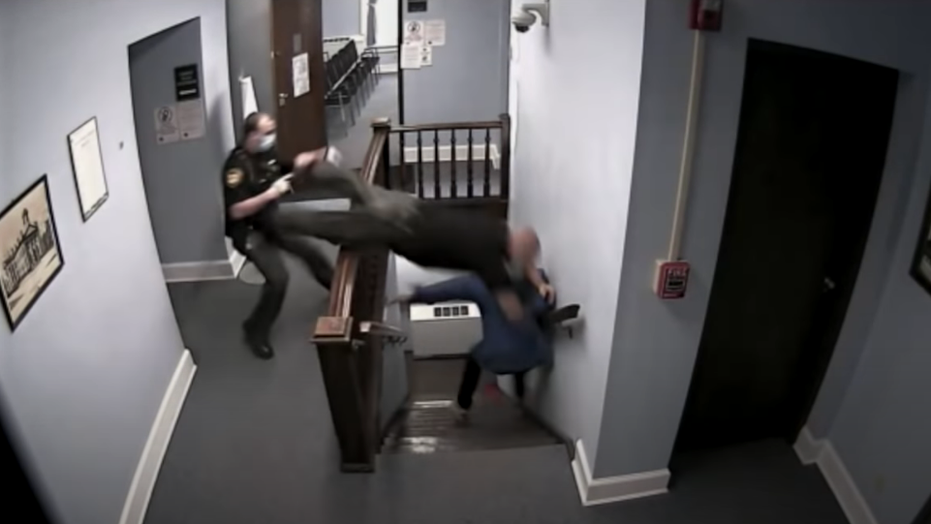 A manhunt was underway this week for an Ohio drug suspect who fled from a courtroom Tuesday, according to reports.

The suspect, identified as Nickolaus Garrison, 34, of Hillsboro, broke free of sheriff’s deputies during a pat-down and bolted down the stairs of the Highland County Courthouse after he was sentenced on a felony methamphetamine charge.

Video released by the courthouse showed Garrison running out of the room before Deputy Ben Reno chased him into the hallway and dove over a railing in a last-ditch effort to capture the suspect, according to Cincinnati's WKRC-TV. Garrison has been on the run since Tuesday's escape, while Reno suffered four broken ribs and a concussion after the fall.

“The deputy, unfortunately, went down the stairs headfirst in an attempt to try and catch him,” said Highland County Sheriff Donnie Barrera. “I went out to the hospital and visited him when he was getting treated at Highland District Hospital. He was in good spirits at that time."

Barrera said the sheriff's office was following up on leads and is asking for the public's help in identifying Garrison's whereabouts.

CINCINNATI PROFESSOR ON LEAVE AFTER CALLING COVID-19 THE 'CHINESE VIRUS'

“At the time of the incident, he did have blue hair. Information we received now is that he has shaved his head,” the sheriff added, according to the station.

A judge sentenced Garrison to six months in jail, with an additional 530 days because he committed the offense while under community control for a prior drug conviction, The Times-Gazette of Hillsboro reported.