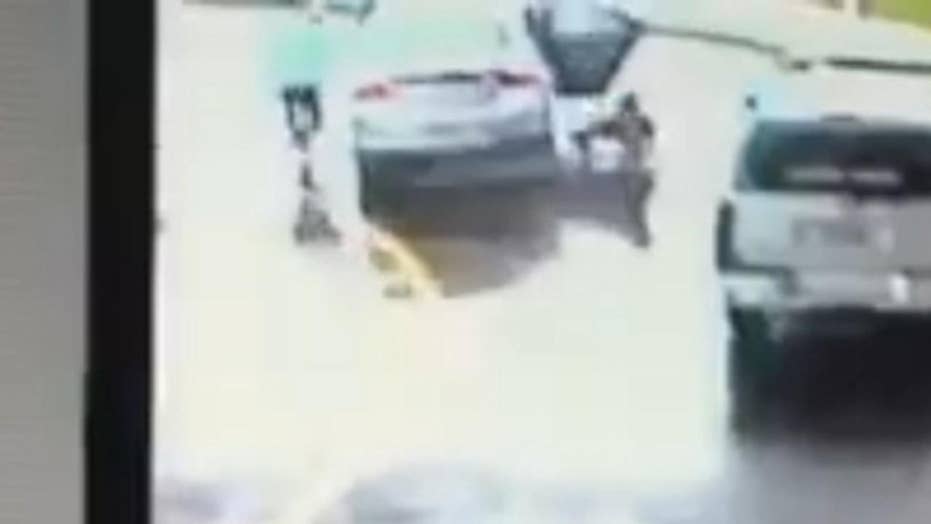 Raw video: 8-year-old Ohio boy hailed as a hero for helping his 10-year-old sister escape from an attempted carjacking and jump from a moving vehicle.

A police department in Ohio is praising the actions of an 8-year-old boy after he saved himself and his sister from an attempted kidnapping on Thursday when their grandmother's vehicle was stolen.

The incident happened in Middletown, Ohio after the children's grandmother had gotten out of the vehicle while taking another woman into the emergency room at a hospital and 24-year-old Dalvir Singh jumped into the driver's seat.

That spurred the boy, identified by Middletown Police as Chance, and his sister Skylar to take action as the vehicle sped away.

"This little guy is a hero. No question," Middletown Police Chief Rodney Muterspaw said in a statement. "He pulled his sister out of the car with no concern for his own safety. That is incredible at his age and outstanding work by Officers Kirby and Engleka to find the suspect and take him down without incident."

As the vehicle began to take off, Chance opened the door of the vehicle to escape as his sister attempted to jump until Singh grabbed the girl's hoodie, according to police.

Chance, 8, is being credited with helping his 10-year-old sister, Skylar, escape from an attempted kidnapping after their grandmother's car was stolen last week. (Middletown Police Department)

"We both started screaming and then my grandma went out and grabbed a hold of the car and he just kept opening and shutting the door trying to get her off," Chance told FOX19.

Her brother was eventually able to grab a hold of her and pulled her away from the 24-year-old, sending both children tumbling out of the car in a moment that was captured on surveillance video.

"What do you see here? If three heroes was the answer then you are correct!" police said in a Facebook post.

"Chance made sure that he and his sister Skylar got out of their car when it was stolen," police said. "They weren't about to be taken by some stranger!"

The grandmother of the children, 69-year-old Nita Coburn, made a valiant effort to save the kids by trying to grab onto a door before being dragged. Coburn did not suffer any serious injuries after the incident, according to FOX19.

Singh, who police said is addicted to heroin, was taken into custody and charged with two counts of kidnapping, felonious assault and grand theft.