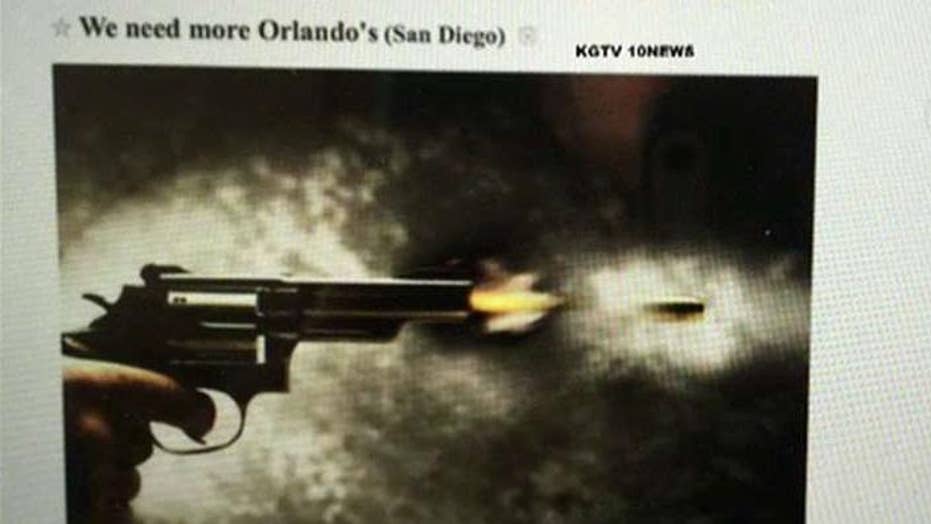 Ad posted to Craigslist claims 'You are next'

Authorities in California are investigating a Craigslist ad that threatened to carry out an Orlando-style massacre in San Diego.

10News reported that a viewer discovered the advertisement in the men-seeking-men section of the Craigslist San Diego personal ads, took a screenshot of it and sent it to the station.

According to the station, the post is title “We need more Orlando’s (sic),” and is accompanied by a hand firing a weapon.

"Orlando was long overdue. Cleanse your community of the filth that gives decent gay men and women a bad name. Those people were walking diseases, bug chasers, and thank god for AIDS and 9-11 and now Orlando. San Diego you are next,” the post read.

10News forwarded the screenshot to the San Diego Police Department and the FBI.

San Diego police Lt. Scott Wahl said the department will investigate the ad. Wahl said that police have extra police officers on patrol in place where people are known to gather in wake of the Orlando massacre.

FBI Special Agent Darrell Foxworth told the station that the bureau’s Joint Terrorism Task Force is also investigating the post. He said law enforcement officials will band together to find out who made the threat.

"This is something that's very serious, very concerning to all of us, especially given what's happened recently in Orlando," Foxworth added.

He also told 10News that federal authorities receive thousands of similar complaints across the country.

Foxworth insisted that there are no known credible threats to San Diego.

According to Fox 5 San Diego, Police Chief Shelley Zimmerman echoed Foxworth in saying there no known threats to San Diego.

“The San Diego Police Department is aware of (the) recent post on Craigslist (which) has since been removed,” she said. “We are investigating collaboratively with our law enforcement partners. The latest information remains (that) there are no known credible threats to the San Diego region.”