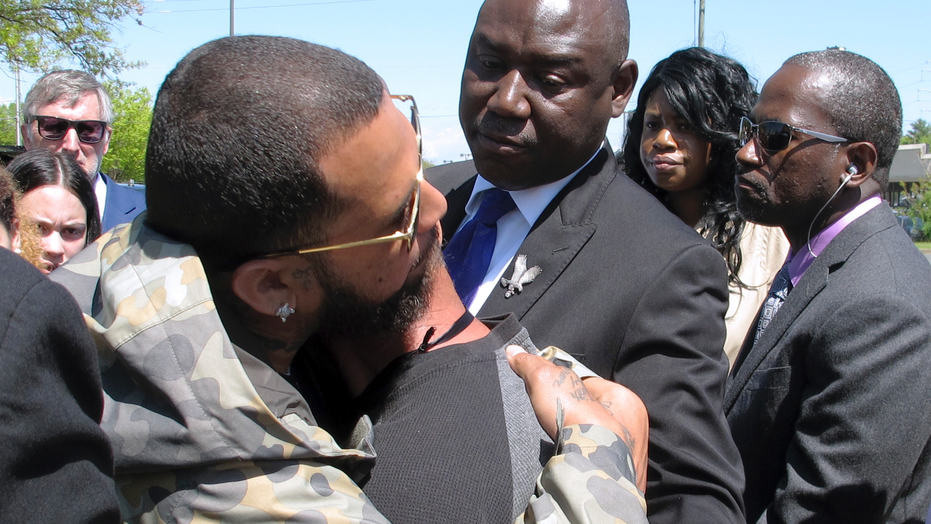 WETHERSFIELD, Conn. – Relatives of a Connecticut man killed by a police officer last month called Wednesday for him to be arrested, while the family's lawyers described the officer as a "ticking time bomb" because of problems he had at another police department.

The family members, attorneys and NAACP officials gathered for a news conference outside the police department in Wethersfield, where officer Layau Eulizier shot 18-year-old Anthony Jose Vega Cruz on April 20. Police body camera and business surveillance videos show Eulizier firing through the front windshield of Vega Cruz's car as Vega Cruz drives at him while trying to flee a traffic stop.

Lawyers Ben Crump and Michael Jefferson said there was no reason for the officer to run in front of the car and create a dangerous situation. They also cited personnel records, first reported Monday by The Associated Press , that said Eulizier had problems handling stressful situations and making tactical mistakes when he was a Manchester officer from 2015 until 2018. The officer joined Wethersfield police in August.

"You have this ticking time bomb that they put on patrol here in this city and it begs the question, did they even look at his personnel file from his previous employer and, if so, then why would you hire this officer," said Crump, a Florida attorney known for representing the families of young black men killed by police.

"There is no reason, when you look at the history of this police officer, that he should have been on the street," Crump said. "It was foreseeable that this tragedy or one like it would occur."

Vega Cruz was Hispanic, while Eulizier is black. Crump and Jefferson called the shooting another example of a national problem of police officers unjustifiably killing and wounding young people of color.

Wethersfield Police Chief James Cetran has declined to discuss details of the shooting, the records from Manchester police and the reasons Eulizier was hired.

"Out of respect for the process undertaken by the Connecticut State Police and the Hartford State's Attorney we will not have any comment on any aspect of this event until their work has been completed," Cetran said in an email to the AP on Wednesday.

Hartford State's Attorney Gail Hardy is leading an investigation of the shooting, while Eulizier is on paid leave pending the review under normal police protocols.

Eulizier has not returned messages seeking comment. His lawyer, Elliot Spector, said Tuesday that he believed deadly force was justified because the officer's life was in danger when the car came at him. Eulizier had to run in front of the car, when it stopped briefly, because he couldn't see the driver through the darkly tinted door windows, Spector said.

Spector also said the Manchester documents portray Eulizier unfairly. While Eulizier did make "some rookie mistakes," the records pertain only to a small fraction of Eulizier's time on the Manchester force and don't show all the good he did, Spector said. Eulizier is upset about what happened and wishes Vega Cruz had not driven at him, Spector said.

The Manchester records show that Eulizier had been told by several Manchester police officials that his conduct in some cases was unacceptable and that he had been sent to remedial training several times. The records describe several episodes in which Eulizier lost his composure with the public and made tactical mistakes.

"It is my opinion that Off. Eulizier needs immediate attention," Manchester Sgt. Jamie Taylor wrote in 2016. "I worry that if he does not vastly improve his work performance under stress he is going to hurt himself or someone else."

Former Manchester Police Chief Marc Montminy reprimanded Eulizier in January 2018 for improperly approaching a car during a traffic stop with his gun drawn and pointed at the driver. Montminy wrote to Eulizier that although department officials had made several attempts to help the officer correct performance problems, "we are still observing deficiencies."

Eulizier also was involved in a fatal police-involved shooting in 2015 that was ruled justified. A state trooper killed a man threatening the officers with a box cutter. Eulizier also fired at the man but missed.

"I want the cop to be in jail," she said. "There was no reason for him to shoot him."