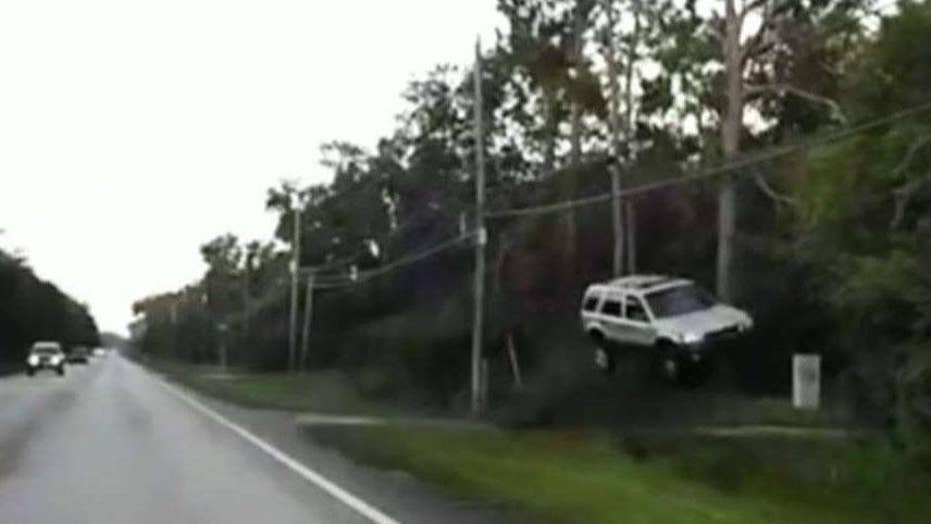 There is not a clear reason as to why the vehicle drifted off the road.

An off-duty Florida police officer jumped into action after witnessing an SUV hitting the bank of a driveway and going airborne Friday morning.

Reserve Ponce Intel patrol Officer Rich Gardner was on State Road 415 in New Smyrna Beach when he saw a white SUV drift across the road before it hit a back on a driveway and go airborne. The vehicle hit some trees before landing in a ditch.

Gardner and another man ran to the smoking SUV and helped the two people - a man and a woman - in the vehicle, according to Fox 35.

FLORIDA BOY, 9, DROWNS IN CREEK WHILE UNCLE AND MOM SWIM NEARBY

“There was a female inside that was at the closest point to the door, and she was in some pain, she said she had back pain. I just asked her to grab my arm, so I could pull her out. We got her out first and then the driver ended up jumping out on his own,” Gardner said.

The police officer stayed with the pair until a nurse took over for them. He told Fox 35 that he believes they're both going to survive.

It's still not clear why they drifted across the oncoming lane.

Butch Robidoux, an office specialist at the Ponce Inlet Police Department told Fox News they are aware of the incident but had no comment because the Gardner was off-duty at the time.