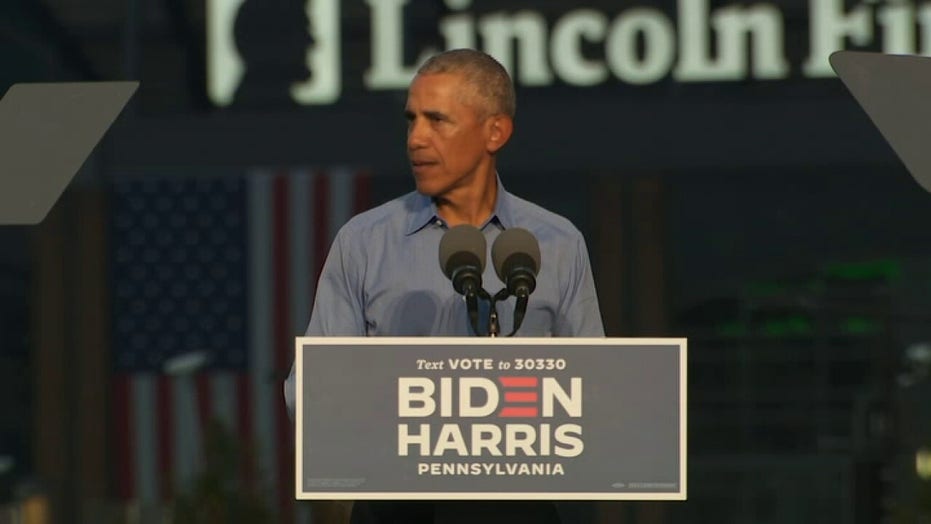 Obama calls out Trump at rally for retweeting conspiracy theories

Barack Obama campaigned for Biden at a drive-in rally in Miami Saturday as both Biden and Trump make a final push for Florida.

"Ten days Miami, 10 days until the most important election in our lifetime," the former president told supporters. "This election requires every single one of us. What we do in these next 10 days will matter for decades to come."

The former president encouraged voters to cast their ballots early either with a mail-in ballot or at early voting sites across the state.

He also slammed President Trump for his handling of the coronavirus pandemic and a host of other issues.

"At least 220,000 Americans are dead. More than 100,000 small businesses have closed. Half a million jobs are gone right here in Florida," Obama said.

"I understand the president is coming to Florida today. You think he's hard at work coming up with a plan to get us out of this mess? ... He doesn't have a plan. He doesn't even acknowledge the reality of what's taking place all across the country."

BIDEN NIXES RECIPROCATION IN TRUMP'S ATTACKS ON FAMILY: 'IT'S CRASS'

He spent the day before campaigning in The Villages and Pensacola, then spent the night at his Mar-a-Lago club.

It will likely be just as close in 2020. According to a RealClearPolitics average of polls, Biden is slightly ahead of Trump 48.6% to 47.1% right now.

Voter turnout is also on track to break records this year, as 5,288,965 Florida residents already had voted by mail or in person at early voting sites as of Saturday morning, according to the state's Division of Elections.

Before Obama spoke at the rally in Miami, he made a surprise stop at a Democratic volunteer location to make it clear just how important the swing state is this year.

“If you bring Florida home, this thing’s over," he told volunteers before they headed out to knock on doors.