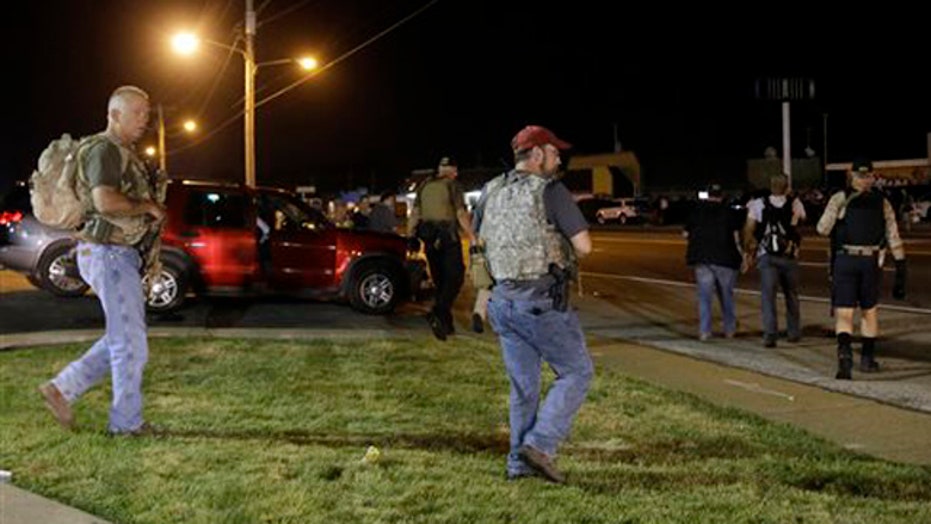 Four white men armed with rifles who arrived early Tuesday at protests in Ferguson, Mo., said they were there to protect journalists, but they were not welcomed by police, who fear their presence could prove "inflammatory" amid demonstrations marking the one-year anniversary of the racially charged police shooting of a black man.

Members of the group "Oath Keepers," an association of current and former soldiers or law enforcement and self-professed guardians of the Constitution, told Reuters they were there to provide protection for journalists from the conservative website Infowars.com. But like the police, the mostly African-American protesters seemed to find their presence provocative.

"I hope some black "oath keepers" show up tonight," read one tweet. Another user tweeted, "If oath keepers were black, they would have been killed by the trigger happy white cops."

Meanwhile, authorities arrested nearly two dozen people during a protest that stretched into early Tuesday, marking the anniversary of the Aug. 9, 2014, fatal shooting of 18-year-old Michael Brown, although there was no repeat of the violence that scarred weekend demonstrations. Police and community leaders are desperately hoping to avoid a replay of the rioting that occurred after Brown was shot and again in November, after a grand jury declined to indict Ferguson Police Officer Darren Wilson.

"Their presence was both unnecessary and inflammatory"

On Tuesday, there were no shots fired and no burglaries, looting or property damage during the protest along West Florissant Avenue, St. Louis County police spokesman Shawn McGuire said. That thoroughfare was the focus of months of massive protests and sometimes violent unrest last summer after the killing of Brown by a Ferguson police officer. McGuire said approximately 23 arrests were made, though police were still confirming official totals.

Despite the calm, authorities fear any any interference from outside, whether from out-of-town protesters, or groups coming in and claiming to be keeping the peace, could set off new conflict. That prompted some authorities to level criticism at the gun-toting Oath Keepers.

"Their presence was both unnecessary and inflammatory," Jon Belmar, the St. Louis County police chief said, according to Reuters.

It was not the first time Oath Keepers went to Ferguson. In December, members were seen on rooftops and in the streets during protests. The Washington Post reported that members spoke of lending a sense of security to a small community in the national spotlight. Although in both instances, police have threatened arrest, no Oath Keepers were accused of breaking the law.

Founded by Yale Law graduate Stewart Rhodes, the group claims 35,000 members. In a 2008 manifesto, Rhodes warned that Americans will be left to protect themselves and their rights if a "police state comes to America."

"That is a harsh reality, but you had better come to terms with it now, and resolves to not let it happen on your watch," he wrote.