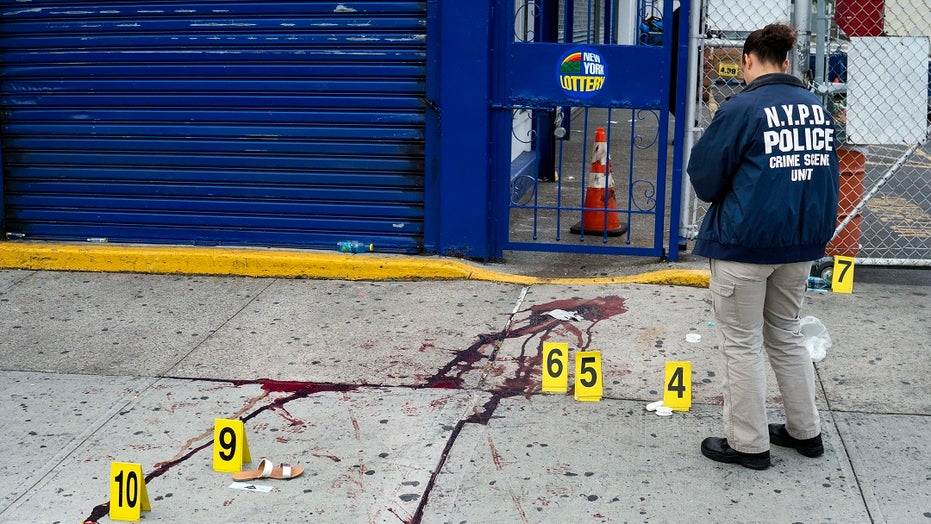 Commissioner Dermot Shea, the NYPD's top cop, said 160 gun arrests were made between Aug. 31 and Sunday.

In this Sept 5, 2016, file photo, crime scene investigators with the New York Police Department work at the scene where multiple people were killed and others injured in a shooting during J'ouvert festivities in the Brooklyn borough of New York. NYPD Commissioner Dermot Shea on Tuesday said the department reached a 25-year high in gun arrests last week with 160 people taken into police custody. (AP Photo/Craig Ruttle, File)

The news came after 23 shootings -- two fatally -- occurred over the holiday weekend. The shootings victims include a 6-year-old, his mother and three others who were wounded by gunfire while celebrating J’Ouvert, a Caribbean culture festival, in Brooklyn early Monday.

Despite the bloodshed, Mayor Bill de Blasio touted the three-day break as a "peaceful weekend" during his Monday briefing.

"We had one incident and it is a very troubling incident where one individual shot five people in Crown Heights in the early morning hours Monday. One of those people was a 6-year-old boy. And that's deeply troubling," he said. "Thank God none have life-threatening injuries. But except for that incident. Overwhelmingly, we had a peaceful weekend in central Brooklyn and it really is because of the hard work of everyone."

The increase in gun arrests should dispel allegations from some city leaders that officers are purposefully engaged in a work slowdown, Shea said.

“So that should put to bed … any talk of what cops are doing out there. Cops are putting themselves on the line every day, as they have been," he said. “The problem is there’s too many guns out there, and there’s not enough consequences, and once we get our heads wrapped around that, I think we’ll be in a better place."

"You cut the budget. You take all the cops off the street and then you wonder why it takes longer for cops to get the job," he told the radio station.

Shea noted that 436 gun arrests were made in a 28-day period ending Sept. 6, a sharp uptick from the 320 recorded in the same time period last year, according to the New York Post. He attributed some the uptick in gun crimes to bail reform and court closures.

An analysis by the newspaper revealed the clearance rate for shootings dropped from over 30% to around 20%.