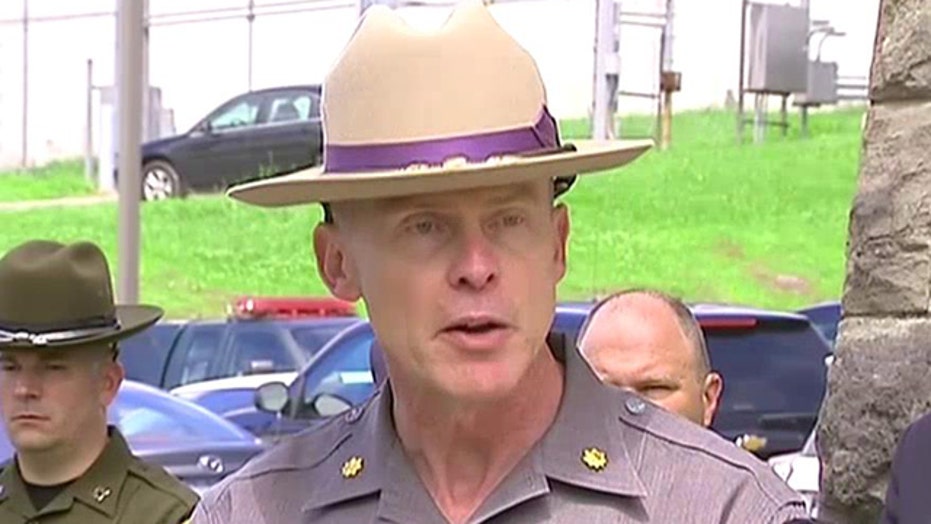 Police: Escaped inmates may have been spotted near Pa. border

The search for two escaped killers landed Saturday near the New York-Pennsylvania border after an unconfirmed sighting of the two men, about 350 miles from the prison where they escaped two weeks ago.

A New York State Police spokesman said officers were investigating a claim that the two men were seen Saturday running along a railroad line near the town of Friendship. The spokesman said that while it was an unconfirmed sighting, police were asking residents in the area to be on alert.

Hundreds of law enforcement officers walked railroad tracks and checked car trunks as a helicopter flew back and forth over the town of Friendship.

"We will search under every rock, behind every tree and structure until we are confident that that area is secure," State Police Maj. Michael J. Cerretto said at a news conference Sunday.

Concentrating in the area along County Route 20 and Interstate 86, officers set up roadblocks and deployed search dogs. At one point, state police outfitted in camouflage could be seen heading into some woods.

David Sweat and Richard Matt escaped June 6 from the Clinton Correctional Facility in Dannemora, near the Canadian border. The two broke out of the maximum-security prison using power tools and leaving behind dummies under covers in their adjoining cells.

A door-to-door search involving up to 800 law enforcement officers has been underway since then, concentrated in a several-mile radius of woods and fields around the prison in the Adirondacks.

State police moved the search command post from the prison Saturday to the nearby village of Cadyville and focused attention on the other side of the state.

Authorities said Friday that two men fitting the description of Sweat and Matt had been seen a week ago in Steuben County, east of Allegany County. Two men were seen walking near a rail yard in Erwin on June 13, and then seen the next day in Lindley, New York, heading toward the Pennsylvania border.

State police spokesman Beau Duffy told FoxNews.com Saturday that troopers learned about the possible weekend sightings on Tuesday. Troopers then sought to verify the sightings over the next two days. Late Friday afternoon, troopers got their hands on the surveillance video.

Duffy said at that point commanders decided to release information on the possible sightings to alert the public and to hopefully generate more leads.

Sweat, 35, was serving a life sentence without parole for killing a sheriff's deputy. Matt, 48, was doing 25 years to life for the 1997 kidnap, torture and hacksaw dismemberment of his former boss.

Prison worker Joyce Mitchell remained in custody Saturday on charges she helped the two men escape by providing them hacksaw blades, chisels and other tools. She has pleaded not guilty.

Officials said a corrections officer also has been placed on administrative leave as part of the investigation into the men's escape. The state Department of Corrections and Community Supervision said no additional information was available.