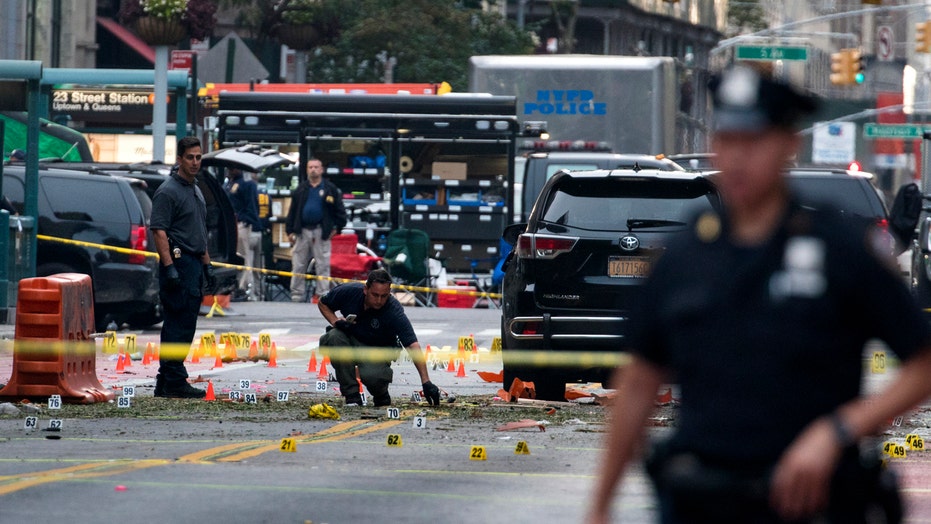 Federal authorities conducted a traffic stop of a “vehicle of interest” in the Chelsea bombing Sunday night in Brooklyn. A law enforcement source told Fox News that a “number of individuals” who are possibly connected to the explosion were taken into custody.

Law enforcement officials told the Associated Press that at least 5 men were being questioned. The two officials spoke on condition of anonymity because they were not authorized to talk about an ongoing investigation. The FBI said in a statement that no one had been charged with any crime and the investigation was ongoing.

New York state Sen. Marty Golden posted an Instagram photo, saying the FBI took “several individuals” into custody on the Belt Parkway underneath the Verrazano Bridge at around 8:40 p.m.

New York City Mayor Bill de Blasio said earlier Sunday that residents should expect a heightened security presence as the investigation continued and when the United National General Assembly kicks off, which draws leaders from around the world.

"Now for all New Yorkers, a central message we want to give today is be vigilant," de Blasio said during a news conference. "Be vigilant at this point in time, not just because of this incident, be vigilant because we’re going into United Nations General Assembly week."

The Democratic mayor added that those in the city will see a "a very substantial" police presence this week which he described as "bigger than ever."

"We would normally have an expanded presence for the United Nations General Assembly," de Blasio said. "You will see an even stronger presence now."

New York Gov. Andrew Cuomo added that he had directed state police and National Guard to deploy an additional 1,000 uniformed police officers out an abundance of caution to high-profile locations across the state.

"Out of an abundance of caution, we are increasing security at high-profile locations across the city, and all state agencies continue to remain on alert," Cuomo said in a statement.

A spokesman for the United Nations told the Associated Press that the organization is assessing security in the wake of the bombing as it prepares to host world leaders arriving for the General Assembly.

U.N. Spokesman Stephane Dujarric said Sunday that security inside the complex "is being assessed on a constant basis."

He added that security outside the U.N. is the responsibility of the host country.

"We receive great cooperation and appreciate the support from the federal authorities and the NYPD throughout the year, and especially during the General Assembly to keep staff, delegates and visitors safe," Dujarric told the AP.

Cuomo, who toured the site of the blast, said there didn't appear to be any link to international terrorism. He said the second device appeared "similar in design" to the first, but did not provide details.

A law enforcement source told Fox News on Sunday that the explosive devices found in Seaside Park, N.J. and New York City NY are believed to be from the same person.

A separate federal law enforcement official told the Associated Press that the bomb contained residue of an explosive often used for target practice that can be picked up in many sporting goods stores.

The discovery of Tannerite in materials recovered may be important as authorities probe whether the blast was connected to an unexploded pressure-cooker device found by state troopers just blocks away, as well as a pipe bomb blast in a New Jersey shore town earlier in the day.

"We're going to be very careful and patient to get to the full truth here," de Blasio said Sunday. "We have more work to do to be able to say what kind of motivation was behind this. Was it a political motivation? A personal motivation? What was it? We do not know that yet."

Cell phones were discovered at the site of both bombings, but no Tannerite residue was identified in the New Jersey bomb remnants, in which a black powder was detected, said the official, who spoke to The Associated Press on condition of anonymity because the official was not authorized to comment on an ongoing investigation.

Authorities said the Manhattan bombing and the blast 11 hours earlier at the site of a 5K race to benefit Marines and sailors in Seaside Park, New Jersey, didn't appear to be connected, though they weren't ruling anything out. The New Jersey race was cancelled and no one was injured.

Officials haven't revealed any details about the makeup of the pressure-cooker device, except to say it had wires and a cellphone attached to it.

Tannerite, which is often used in target practice to mark a shot with a cloud of smoke and small explosion, is legal to purchase and can be found in many sporting goods stores. Experts said a large amount would be required to create a blast like the one Saturday night, as well as an accelerant or other igniter.

Police and federal spokespeople wouldn't comment on the presence of explosive material recovered at the scene.

The bomb in Manhattan appeared to have been placed near a large dumpster in front of a building undergoing construction, another law enforcement official, speaking on condition of anonymity to discuss the ongoing investigation, told the AP. The second device, described by the same official as a pressure cooker with wires and a cellphone attached to it, was removed early Sunday by a bomb squad robot and New York City police were preparing to blow it up in a controlled explosion later in the day, authorities said.

Homemade pressure cooker bombs were used in the Boston Marathon attacks in 2013 that killed three people and injured more than 260.

Officials solicited tips from the public, telling reporters at a news conference in the New York Police Department's headquarters that they didn't know who set off the bomb or why.

Members of the FBI's Joint Terrorism Task Force were investigating the blast along with New York Police Department detectives, fire marshals and other federal investigators.

Meanwhile, a law enforcement official said federal investigators had discounted a claim of responsibility on the social blogging service Tumblr. Investigators looked into it and didn't consider it relevant to the case, according to an official who spoke to the AP on condition of anonymity to discuss an ongoing investigation.

Fox News' Matt Dean and Rick Leventhal and the Associated Press contributed to this report.