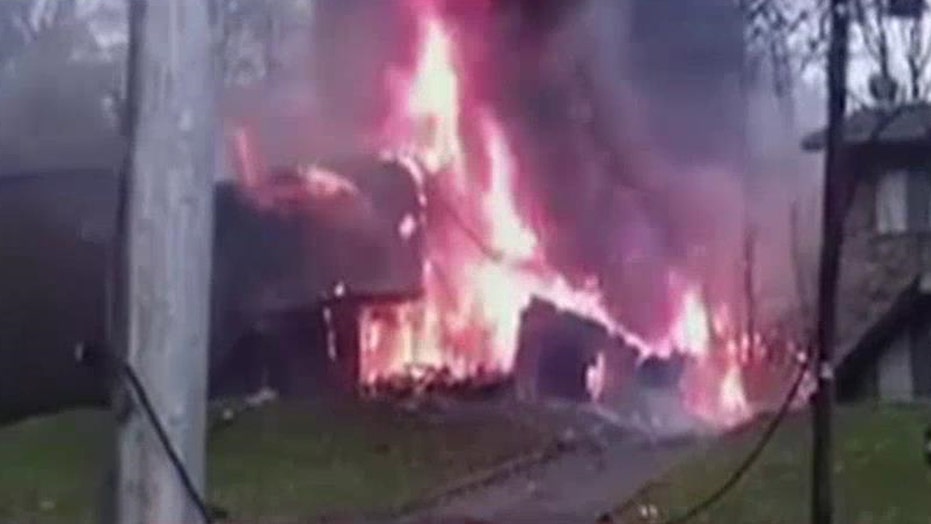 CLEVELAND – The National Transportation Safety Board on Tuesday concluded the pilot in control of a corporate jet as it approached an Ohio airport improperly set the aircraft's flaps and failed to maintain a proper speed, causing the plane to plunge into an apartment building, killing all nine people on board.

The four-member safety board also blamed Execuflight, a Fort Lauderdale, Florida, aviation company that operated the jet, for inadequate pilot training and aircraft maintenance and the Federal Aviation Administration for failing to provide proper oversight of the company.

The pilot and his captain in charge of the flight were carrying seven employees of a Florida commercial real estate company from Dayton, Ohio, to Akron. The Nov. 10, 2015, crash occurred less than two miles from Akron Fulton International Airport.

NTSB Chairman Christopher Hart said at the start of Tuesday's hearing in Washington that procedures disregarded by the pilots "read like pages from basic text for preventing accidents."

Audio from a cockpit voice recorder recovered from the wreckage showed it was First Officer Renato Marchese and not Capt. Oscar Chavez at the controls when the plane crashed. Company pilots told the NTSB it was an informal policy at Execuflight for captains in charge of a flight to maintain controls during takeoffs and landing with passengers on board.

The NTSB concluded that Chavez and Marchese failed to use a pre-landing checklist or follow normal procedures, such as calling out altitudes, as it approached the airport. The NTSB said Chavez, who was recorded telling Marchese the aircraft might stall, should have assumed control of the plane when he realized it could crash.

The investigation found that both pilots had been fired from their previous jobs — Chavez for missing training and Marchese for poor performance and inattention to details. The NTSB noted that Execuflight owner Augusto Lewkowicz told investigators he hired Marchese and Chavez based on recommendations of other pilots and that he didn't check with their former employers.

A telephone message left with Lewkowicz after the hearing wasn't immediately returned.

Former Execuflight pilot Donnie Shackleford told investigators Marchese had said he was worried about working with Chavez because of their inexperience flying in wintry weather. Shackleford said he was dismissed from the company about a week before the NTSB interview. According to Shackleford, Marchese told him not long before the crash: "If they put me and Oscar together, we're going to get ourselves killed."

The crash occurred on rainy day with a low cloud cover. A flight instructor on a small plane that landed minutes before the crash had radioed Chavez and Marchese telling them his plane had emerged from the clouds at the minimum altitude acceptable for a safe landing at the Akron airport. The jet pilots acknowledged the instructor's transmission.