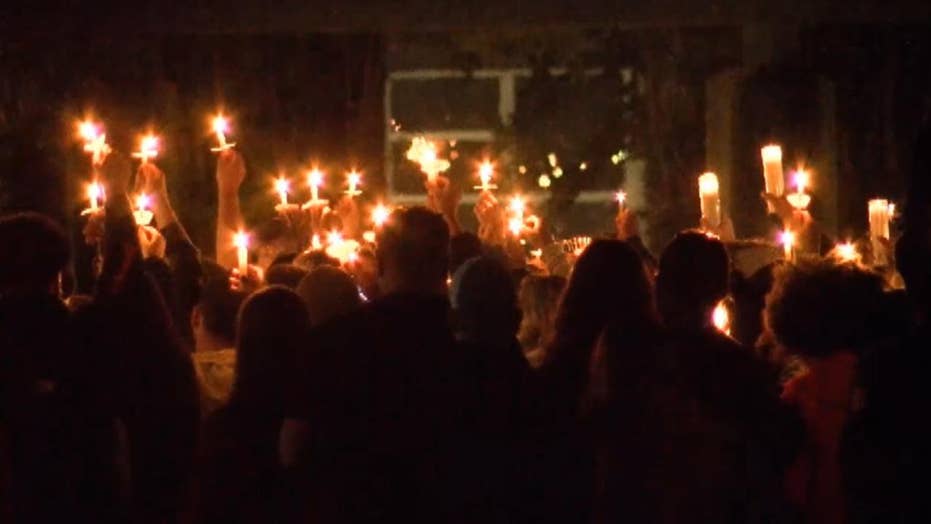 Community comes together to remember Bobby McKeithen who was allegedly shot and killed by another student Jatwan Cuffie at Butler High School.

A North Carolina high school student shot and killed a classmate on Monday after a fight stemming from “bullying that escalated out of control,” officials said.

Jatwan Craig Cuffie, 16, was charged with first-degree murder in the death of Bobby McKeithen, 16, who died in the hospital shortly after the shooting at Butler High School.

“And as fear took over a young person brought a gun to solve the problem,” Charlotte-Mecklenburg Schools Superintendent Clayton Wilcox said. “...There was no evidence that these two kids had anything in common in terms of beef that went on…at school.”

Jatwan Craig Cuffie, 16, was arrested after allegedly shooting and killing a student. He's expected to appear in court on Tuesday. (AP/Matthews Police Department)

Wilcox would not comment further on the bullying, including which student was allegedly being bullied.

Shots rang out inside the high school in Matthews, about 12 miles southeast of Charlotte, around 7 a.m., prompting a lockdown and mass panic among the students. Wilcox said the hallways were crowded with kids when Cuffie allegedly gunned down McKeithen. Cuffie was arrested shortly after.

"Someone asked me how could someone, especially a student, come onto one of our campuses with a loaded gun, and I wish I had an answer to that," Wilcox said. "There really is no easy answer. We do not have metal detectors in our schools. We do not search our students on the way into school. Our schools and students rely on cooperation between and among each other. And today, that simply wasn't enough."

Parents rushed to the high school as their children were ordered to stay in place during the lockdown. Several people said chaos ensued while they were trying to pick up the students.

“Lights went black, everyone was told to get in the corner of the classroom” Butler High School Senior Blake Elizalde told Fox 46.

“I was in the cafeteria, the hallway next to the cafeteria...and I just heard a shot. Well, I heard a loud noise. I thought it was someone banging against the lockers. I thought it was a prank at first, and I saw people running,” another student told the news station. “...As soon as I get to my hallway, teachers are yelling, ‘There’s a lockdown, there’s a lockdown! There’s a shooter!'”

By late Monday morning, school officials said that the lockdown was lifted and families could pick up students at the main entrance. Classes were proceeding for students who remained on campus.

Butler High School Principal John LeGrand said in a message the school and extra-curricular activities were canceled on Tuesday.

Cuffie is expected to make his first court appearance on Tuesday.