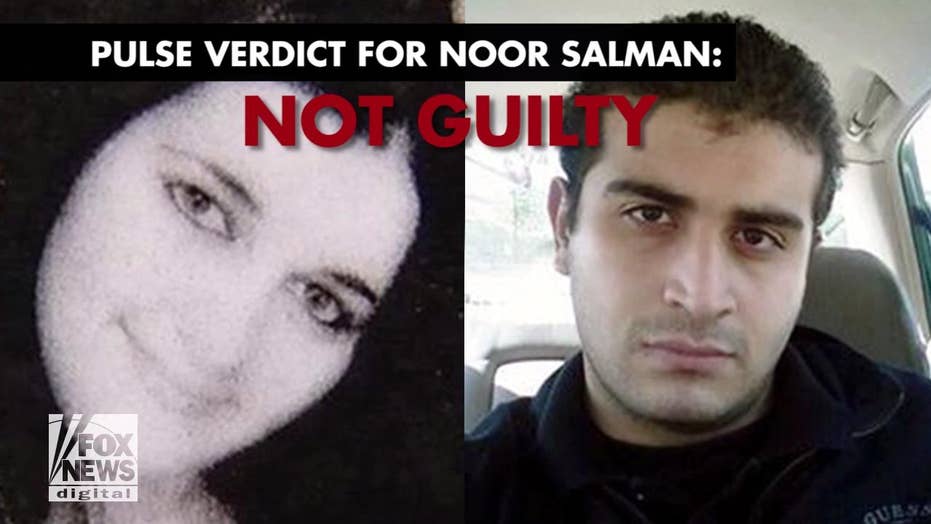 Noor Salman, the widow of the gunman who killed 49 people at an Orlando nightclub in 2016, was found not guilty of obstruction and aiding and abetting by attempting to provide material support to a terrorist organization.

Noor Salman, the widow of the gunman who killed 49 people at an Orlando nightclub in 2016, was found not guilty Friday of obstruction and aiding and abetting by attempting to provide material support to a terrorist organization.

Salman had faced up to life in prison if she was convicted. The charges she was acquitted of included lying to the FBI and aiding her husband in the attack.

The decision came on the third day of deliberations, after the jury convened for a total of 12 hours.

Salman's hands were shaking as she walked into the courtroom and she appeared extremely emotional when the verdict was announced. She had tears streaming down her face while she looked at her family and smiled.

On the other side of the courtroom, the families of the victims of the shooting sat stone-faced and silent.

WHAT TO KNOW ABOUT NOOR SALMAN

“We are so grateful to them and their verdict today,” a family spokesperson told reporters. “Noor can go home now to her son and pick up pieces from two years in jail.”

Chief John Mina of the Orlando Police Department released a statement on the verdict, saying "I believe in our criminal justice system and am grateful for the jury's hard work and thoughtful deliberations. Nothing can erase the pain we all feel about the senseless and brutal murders of 49 of our neighbors, friends, family members and loved ones."

He added: "Our community is strong, and the men and women of the Orlando Police Department stand ready to put themselves in harm's way to protect our residents and visitors."

Sheriff Jerry L. Demings of the Orange County Sheriff's Office said in a statement he was "disappointed" with the verdict.

"I am disappointed in the outcome of the trial and know that the victims and/or their families are more disappointed. This has been an emotional event for our community and many may feel that justice has not prevailed; however, the system of justice has spoken and we should look to the continued healing for the families and our entire community so that this event will not define us," Demings wrote.

onePULSE Foundation, a fund created by the owners of the nightclub, told Fox News in a statement the verdict "cannot and will not divide us."

"This verdict cannot and will not divide us. The survivors, families, and first responders as well as the community of Orlando and everyone around the world must now focus on the work ahead of us," the foundation's founder, Barbara Poma, wrote. "It will be difficult, but we will focus now on healing, and we will continue to work to help communities emerge from violence and hate. It is as important today as it was 21 months ago."

Prosecutors had argued Salman and her husband, Omar Mateen, scouted out potential targets to attack together -- including Disney World's shopping and entertainment complex -- and she knew he was buying ammunition for his AR-15 in preparation for a jihadi-inspired attack. In the end, Mateen chose Pulse, a gay nightclub, for the deadly shooting on June 12, 2016.

Since the beginning, Salman claimed she had nothing to do with the massacre. Prosecutors relied mostly on a confession the widow gave to the FBI just hours after the rampage when she admitted she knew about Mateen "acquiring weapons, watching Islamic State videos and discussing possible locations in apparent preparation" for the attack, The New York Times reported.

Salman's defense attorneys argued Salman's statement was a "false confession" because her lawyers were not present. She was questioned by the FBI for more than 11 hours. The jury did not hear Salman's statements to the FBI because the agent, Ricardo Enriquez, did not record them, the Orlando Sentinel reported.

Defense attorneys described Salman, who was born in California to Palestinian parents, as a simple woman with a low IQ. She was abused by her husband, who cheated on her with other women and concealed much of his life from her, they said.

During the trial, prosecutors said Salman advised Mateen to lie to his mother when she inquired of his whereabouts on the night of the shooting. They said Mateen, who was born in New York to Afghani parents, intended to attack Disney World's shopping and entertainment complex by hiding a gun in a stroller but became spooked by police and instead chose the gay club as his target.

Mateen, who had pledged allegiance to the Islamic State group, was killed by police in the hours after the Pulse shooting.

Earlier this week, defense attorneys asked the judge for a mistrial after they found out that Mateen's father had been an FBI informant for years. The judge rejected the request, saying the trial was about Salman, not Mateen's father.

Salman did not testify in her defense.