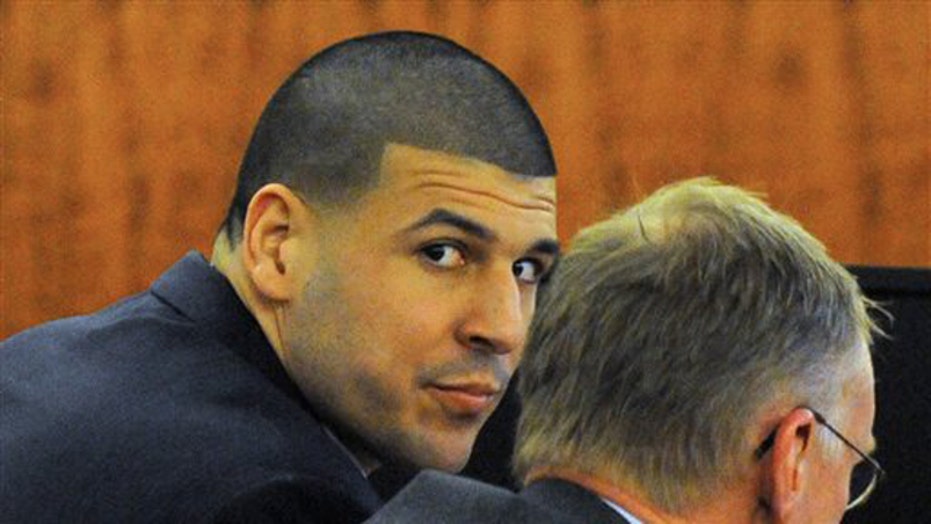 Defense attorney concedes client was at scene but only witnessed crime

The jury has spent more than 27 hours deliberating whether Hernandez is guilty in the 2013 killing of Odin Lloyd, who was dating the sister of Hernandez's fiancee. They are due to resume deliberations Tuesday morning.

Monday passed with little action in court, apart from a note from the panel asking the judge to reinstitute a midmorning break so some jurors can smoke. Superior Court Judge Susan Garsh approved the request and said she would remind jurors they could not deliberate unless all 12 were together.

Hernandez, 25, was brought into court briefly at the beginning and end of Monday's session and during the discussion of the note. He mouthed, "I love you" to his fiancee, Shayanna Jenkins, who was sitting in the front row. At other times, he is kept in a holding cell as he awaits the verdict.

Meanwhile, lawyers in the case milled around the courtroom, reading the newspaper or court papers or chatting while they wait.

The jurors appeared to pay close attention during the trial, which lasted more than two months. They have sent several notes since they began deliberations last week, but none have been about the murder charge.

Hernandez lawyer Michael Fee says the defense team won't comment after a verdict, regardless of the outcome.

Hernandez's lawyers have acknowledged he was there when Lloyd was killed, and they said he witnessed the killing. They questioned why he would put his career on the line to kill someone. At the time, Hernandez had a $40 million contract with the Patriots.

Prosecutors say he thought no one would believe he did it.

If jurors decide Hernandez killed Lloyd, they can convict him of either first-degree or second-degree murder.

To convict him of first-degree murder, they must find that he killed Lloyd with deliberate premeditation, or with extreme atrocity or cruelty, or both. It carries a mandatory sentence of life in prison without the possibility of parole.

For a second-degree murder conviction, jurors must find that Hernandez either intended to kill Lloyd, cause grave harm to him or do something that he knew would likely cause Lloyd to die. It carries an automatic sentence of life in prison with the possibility of parole after 15 years.

Even if he is acquitted, Hernandez will not be released from custody. He has pleaded not guilty to murder in Boston, where he is accused of the drive-by killing of two men in 2012. Prosecutors say he felt disrespected after one of the men bumped into him and spilled his drink.