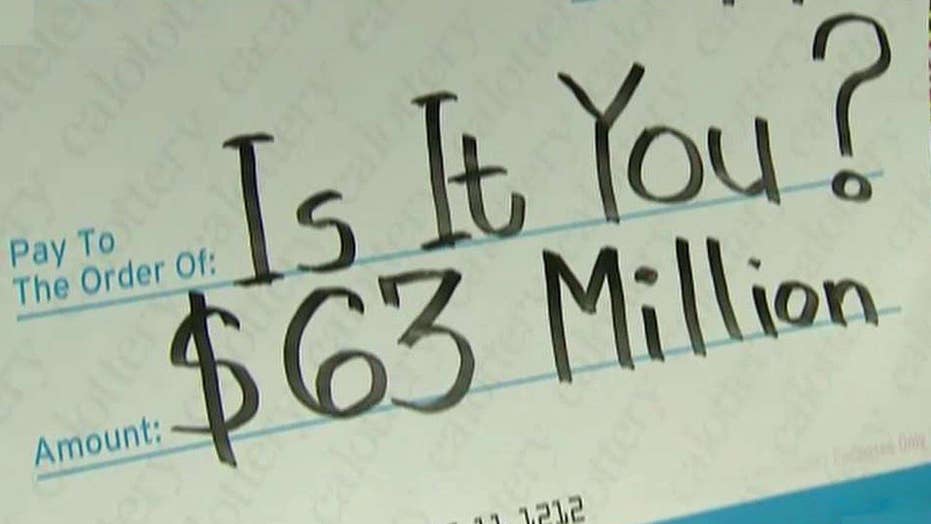 Luck may have run out for the winner of a California Lottery jackpot, after nobody showed up at a state lottery office by 5 p.m. Thursday with the ticket or submitted a verified claim for the $63 million prize.

Lottery spokesman Alex Traverso told the Associated Press there are "some claims to investigate" but no one came forward with the winning ticket.

"So we can say as of right now, no one has come forward with the winning ticket, but we have had lots of inquiries and the potential for more claims," he said.

If none of the claims pan out, it will be the largest unclaimed prize in California Lottery history and the money will go to the state's schools.

On Wednesday, a California man launched a legal battle with the state's lottery, saying they cheated him out of the $63 million prize.

A lawsuit was filed on behalf of Brandy Milliner in Los Angeles one day before the deadline to claim the jackpot.

Milliner claims he turned in the winning SuperLotto Plus ticket and was told to expect his money. However, he claims lottery officials sent him a second letter last month declaring the ticket was too damaged to be processed.

Lottery spokesman Russ Lopez told the Los Angeles Times that it is standard procedure for the lottery to send congratulatory letters to winners claiming a prize, though that doesn't mean they've won.

"The last-minute timing of this is suspicious,” Lopez told the paper. “I am not saying it’s not real."

The winning ticket was sold on Aug. 8 at a 7-Eleven store on Lassen Street in the Chatsworth neighborhood. The winning numbers are: 46-1-33-30-16 and the Mega number: 24.

The winner can accept the $63 million in payments spread out over 30 years or accept a much smaller lump sum of $39.9 million (before federal taxes).

The lottery has repeatedly issued statements urging the winner to come forward before the deadline.

"From my perspective, I'm here and it would be pretty much the best thing for me if the winner popped in the door and we'll have a little celebration," spokesman Alex Traverso said.

It's harder to determine the largest unclaimed prize for a lottery game in U.S. history. But one contender must certainly be a $77 million Powerball jackpot won in Georgia in 2011.

In California, between $20 million and $30 million in prizes from various state-only lottery games go unclaimed every year, Traverso said. Last year, it was about $27.1 million. By contrast, the lottery paid out $3.9 billion in prizes last year on sales of $5.5 billion.