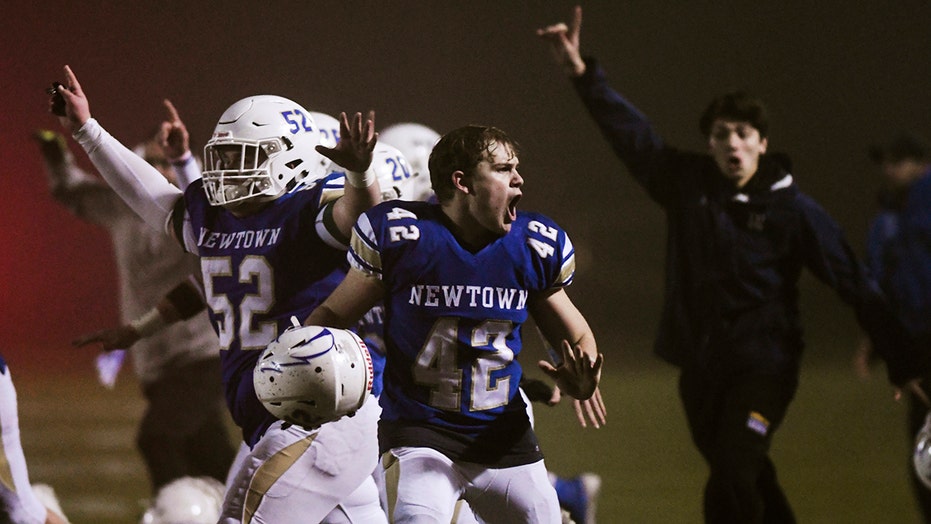 The Newtown HS Nighthawks had been tied with Darien HS’s team as the clock wound down Saturday. Then, through the dense fog, quarterback Jack Street connected with receiver Riley Ward for a dramatic, last-second, 36-yard touchdown pass, local station FOX 61 reported.

Newtown's Ben Pinto (42) reacts after the Newtown Nighthawks beat the Darien Blue Wave with a walk-off touchdown in the Class LL state football championship at Trumbull High School Saturday, Dec. 14, 2019, in Trumbull, Conn. Newtown won 13-7. Newtown marked the seventh anniversary of the massacre at Sandy Hook Elementary School with vigils, church services and a moment of joy when the community's high school football team, with a shooting victim's brother as linebacker, won the state championship Saturday in a last-minute thrill. (Kassi Jackson/Hartford Courant via AP)

Newtown had a victory in the books with a final score of 13-7. The win marked the school’s first state title since 1992, according to the station.

In a stirring video captured by Hartford Courant reporter Shawn McFarland, players erupted in cheers and embraced each other.

“We had moments in that game where it didn’t look too good for Newtown,” Newtown coach Bobby Pattison told the Courant. “I’m so proud of the kids. I couldn’t be happier.”

“The whole town showed out on this special night,” he said. “We knew we had to bring it home for our town. 27 years, it’s crazy. This is crazy.”

Even Newtown’s rival, Darien, praised the team for playing “with your hearts on your sleeves.”