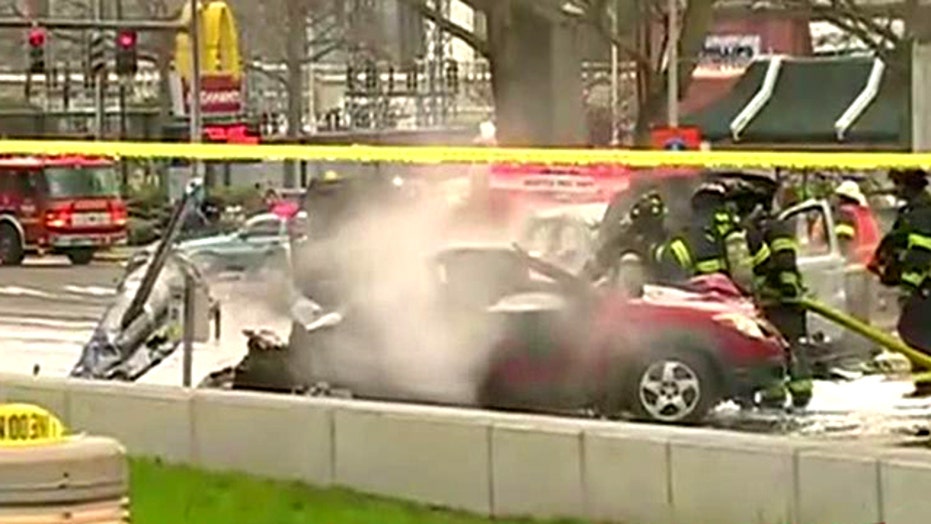 A news helicopter crashed into the street and exploded into flames Tuesday near Seattle's Space Needle, killing two people on board, badly injuring a man in a car and sending plumes of black smoke over the city during the morning commute.

The chopper was taking off from the KOMO-TV station when it went down on Broad Street and hit three vehicles, starting them on fire and sending burning fuel down the street.

Seattle's Fire Department said on its Twitter account that two people were found dead at the crash scene, and a 37-year-old man who freed himself from one of the cars was taken to Harborview Medical Center with burns on more than 50 percent of his body.

KOMO later identified the pilot as Gary Pfitzner, of Issaquah. Also killed in the crash was Bill Strothman, a former longtime KOMO photographer. Both men were working for Cahokia, Ill.-based Helicopters Inc., which owned the Eurocopter AS350. The aircraft was leased jointly by KOMO and KING-TV.

A woman from one of the other burned cars went to a police station and talked to officers. Fire investigators were looking for the man from the pickup truck who walked off.

Hospital spokeswoman Susan Gregg said the facility had received no other victims from the crash.

Kristopher Reynolds, a contractor working nearby, saw the wreck. He said the helicopter lifted about 5 feet and was about to clear a building when it tilted. It looked like it was trying to correct itself when it took dive downward.

"Next thing I know, it went into a ball of flames," he said.

When firefighters arrived, they found the helicopter, two cars and a pickup truck on fire, along with a huge cloud smoke, fire department spokesman Kyle Moore said.

"Not only were the cars on fire, the fuel running down the street was on fire," he told reporters at the scene.

Firefighters stopped the burning fuel from entering the sewer.

An hour after the crash, firefighters had put out the flames and were cleaning up the spilled fuel. Only the tail of the helicopter could be identified among the burned metal on the street next to the Seattle Center.

Workers at KOMO rushed to the window when they heard the crash. Reporters with the station were then in the position of covering the deaths of colleagues.

"We mourn the loss of a couple of our co-workers today," KOMO-TV anchor Dan Lewis said on the air. "It's so difficult for us to look at this scene, of the wreckage down there."

On the street, reporter Denise Whitaker said, "It is definitely a tragic scene down here. It is a difficult time for all of us this morning."

The helicopter was a Eurocopter AS350, said FAA spokesman Allen Kinetzer.

It was departing from the downtown helipad when it crashed and burned under unknown circumstances, he said. The station said the chopper might have hit the side of a building before it went down.

The FAA is investigating but the NTSB is the lead agency, Kinetzer said.

Lewis said it wasn't the regular KOMO helicopter but a temporary replacement for one that's in the shop for an upgrade.