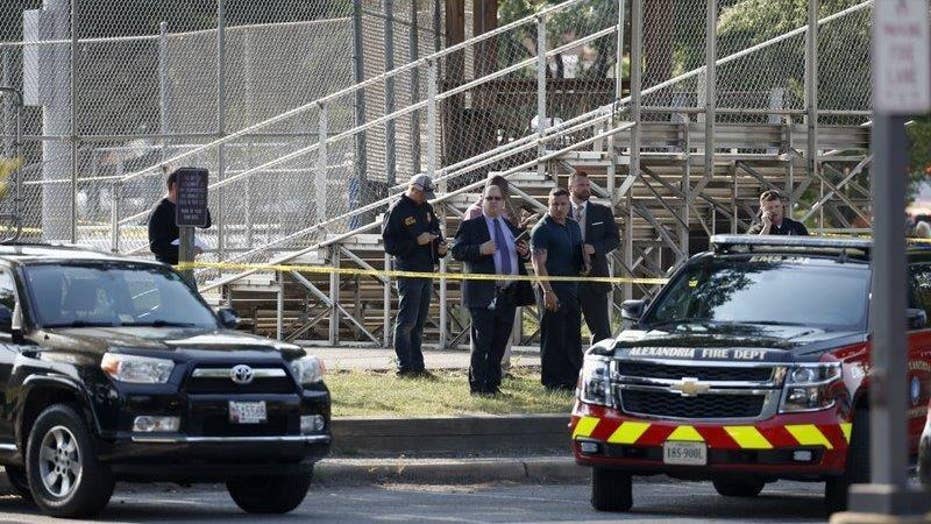 What can be done to better protect lawmakers?

When James T. Hodgkinson opened fire on lawmakers during baseball practice only House Majority Whip Scalise had security - because of his leadership role. Former secret service agent A llok atwhat can be done for members of Congress #Tucker

The New York Times was forced on Thursday to correct an editorial that stated as fact a debunked theory that the gunman who shot Arizona Congresswoman Gabby Giffords in 2011 was inspired by a map circulated by Sarah Palin.

The editorial, titled “America’s Lethal Politics,” was posted Wednesday and widely criticized on social media. The editorial read in part:

On May 31, the New York Times announced that it is doing away with its “public editor” position, which was started in 2003 to improve the paper’s standing with readers following the Jayson Blair plagiarism scandal. (AP)

“Was this attack evidence of how vicious American politics has become? Probably. In 2011, when Jared Lee Loughner opened fire in a supermarket parking lot, grievously wounding Representative Gabby Giffords and killing six people, including a 9-year-old girl, the link to political incitement was clear. Before the shooting, Sarah Palin’s political action committee circulated a map of targeted electoral districts that put Ms. Giffords and 19 other Democrats under stylized cross hairs.”

The paper ran the editorial after the shooting Wednesday morning during a GOP congressional baseball practice that left 4 wounded, including House Majority Whip Steve Scalise, who is in critical condition.

'Not all the details are known yet about what happened in Virginia, but a sickeningly familiar pattern is emerging in the assault: The sniper, James Hodgkinson, who was killed by Capitol Police officers, was surely deranged, and his derangement had found its fuel in politics.'

The Times posted a correction at the bottom of the editorial online:

An earlier version of this editorial incorrectly stated that a link existed between political incitement and the 2011 shooting of Representative Gabby Giffords. In fact, no such link was established.

Documents found in a search of Lougher’s home after he wounded the congresswoman and killed six people in Tucson, Ariz., showed he had planned the shooting in advance.

"I planned ahead," read a note signed by Loughner that was left in a safe. "My assassination."

Authorities also found a letter inside the safe that Giffords wrote to Loughner on Aug. 30, 2007, thanking him for attending a "Congress on Your Corner" event, according to an FBI agent affidavit filed with a five-count criminal complaint.

The FBI said at the time that Loughner had targeted Giffords.

The New York Times drew criticism online from both sides of the political debate.

“The NYT editorial falsely claims Loughner shot Giffords due to a target on a photo. It's not yet 11. They can change it. Let's see," New York Post editor John Podhoretz tweeted.

On May 31, the Times announced that it is doing away with its “public editor” position, which was started in 2003 to improve the paper’s standing with readers following the Jayson Blair plagiarism scandal.