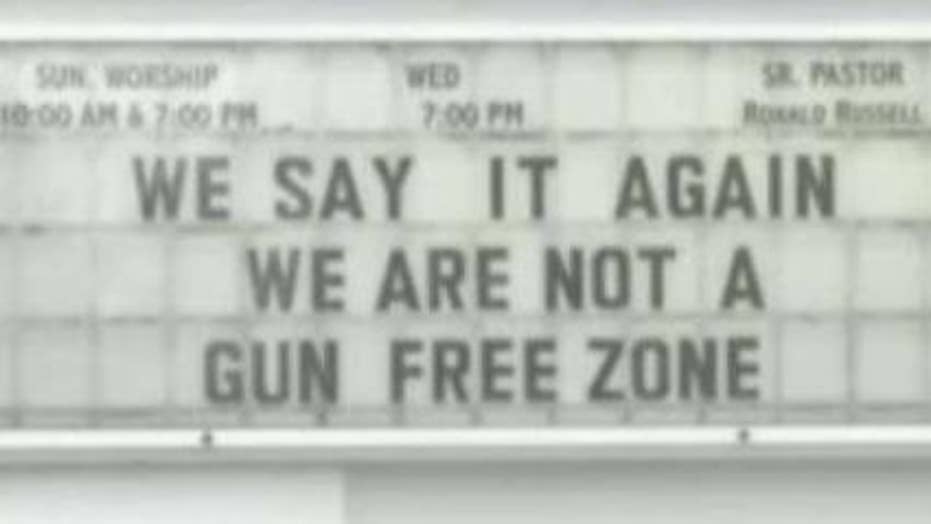 New York church: 'We are not a gun-free zone'

An upstate New York church has a clear message for anyone thinking of doing its congregation harm: “We are NOT a ‘gun-free zone.’”

Members of the Lighthouse Mexico Church of God, in Mexico, New York, openly carry guns from the pulpit to the pews because Pastor Ron Russell believes he's commissioned by God to protect his flock -- and he does so armed with a gun. The "NOT a 'gun-free zone'" warning is even spelled out on the church's website.

The Pentecostal pastor hosts concealed-carry courses for his congregation, and he says his is the only church in the state of New York to do so.

For worship leader Janine Fortino, knowing that church members are packing heat makes her feel safe, especially at the front of the church.

“I’m very vulnerable up there, and knowing that I’m taken care of and protected is a very good feeling,” she told the radio station.

In addition to a security team that patrols the church grounds, church members have taken a series of classes on preventing mass shootings -- including a police-sponsored course on situational awareness.

"If I can train you what to look for, then you can get involved and stop it from happening," Gaita said. "Because when the police respond [to a mass shooting], it's too late."