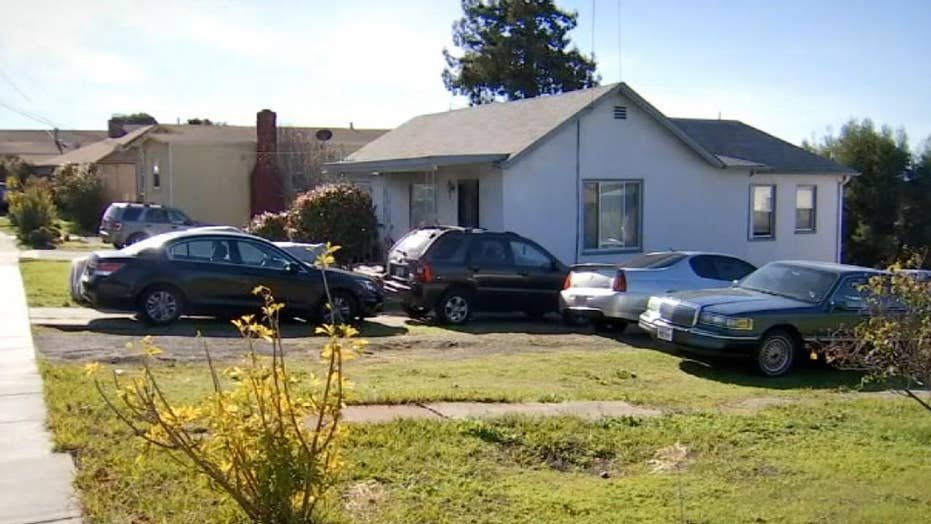 Bullet that hit 6-year-old girl in the head was a result of celebratory gunfire on New Year's Eve, according to police

Police in Oakland are certain a 6-year-old girl who suffered a gunshot wound to her head was the victim of New Year's Eve celebratory gunfire.

As the clock struck midnight and millions cheered the start of 2019, some Americans found themselves ducking for cover or rushing to the hospital when stray bullets from celebratory gunfire suddenly rained down on them.

At least three children were among those who were hit -- two who suffered head injuries and a third who was shot in the stomach.

"It is foolishness," Oakland Police Chief Anne Kirkpatrick said Wednesday. "It is unnecessary in this case. Quite an innocent child was affected and hurt by this foolishness."

A six-year-old girl was struck in the head by a bullet that was fired after midnight on New Year's Day, according to police. (KTVU)

A 6-year-old girl is now listed in stable condition after she was struck in the head while playing in the backyard of her family's home during a New Year's Eve party.

The man who threw the party, and who asked to remain anonymous, told KTVU the shooting occurred just after midnight.

A neighbor told KTVU people could hear gunfire echoing in the neighborhood as 2019 began.

"You could hear all the kids across the street and they were going 5, 4, 3, 2, 1," Roxana Perez said. "There was screaming and tons of gunshots. I told my husband, 'Luckily we won’t get hit.'  I’m thinking it came down on her."

Oakland Officer Johnna Watson said some bullets can travel nearly a mile after being fired.

A 14-year-old was grazed in the head by a bullet after gunshots were reported near Baltimore's Inner Harbor early Tuesday morning.

The shooting happened around 12:12 a.m. at the intersection of Light Street and Lee Street, near the Maryland Science Center.

Baltimore Police told FOX45 the bullet that struck the teenager appeared to have been a stray from celebratory gunfire.

A nine-year-old boy was shot in the stomach after midnight on New Year's Day in Atlanta as he family was setting off fireworks at their home. (FOX5)

A 9-year-old boy was shot in the stomach as his family was shooting off fireworks at their home in Atlanta.

The boy, identified as Alfonso Vasquez, was rushed to the hospital and underwent surgery during the overnight hours.

"It could have hit his heart," Alfonso's mother Santa Nava told FOX5 through an interpreter. "It was really close to his heart."

Investigators have interviewed several people in the neighborhood to try to figure out who may have fired a weapon into the air at the time, according to FOX5.

A woman was shot in the stomach after a stray bullet went into her home in Indianapolis on New Year's Day. (FOX59)

A woman in Indianapolis ended up hospitalized on New Year's Day after she was hit by a stray bullet when standing in her apartment, according to police.

Tiara Spencer, 27, was hit in the stomach after shots rang out after midnight. Spencer is expected to survive, according to FOX59.

“When the ball dropped is when all hell broke loose,” Spencer's fiancée, Rachel Yuille, told the television station.

Indianapolis Police had tweeted five times on New Year's Eve to remind people not to shoot their weapons in the air, but there were still multiple incidents reported throughout the city.

A 60-year-old woman reported that a stray bullet came through her roof, and an 81-year-old reported his ceiling was hit by gunfire.

At Freddie Love's home, a bullet shattered a glass door shortly after midnight

“Stupidity like that costs me money and a sleepless night,” Love told FOX59.

Donald Clark told FOX4 a stray bullet hit the front tire on his work van and then left a hole in his garage door.

"We were just having a good get together with the family, enjoying the New Year. We then heard a big, crashing clank sound," he told FOX4.

Clark said he was just relieved that his two sons weren't playing in the family basement at the time.

"It's just dangerous, very dangerous," Clark said. "Bullets go up, and they must come down -- and nobody knows where they will end up."

Kansas City Police posted on Twitter that many officers working in the urban core got under concrete as 2019 neared "to stay safe from the bullets expected to come down at midnight."

On the other side of the town, Candice and Dylon Adams said that gunfire outside their home after midnight shattered the back window of their SUV.