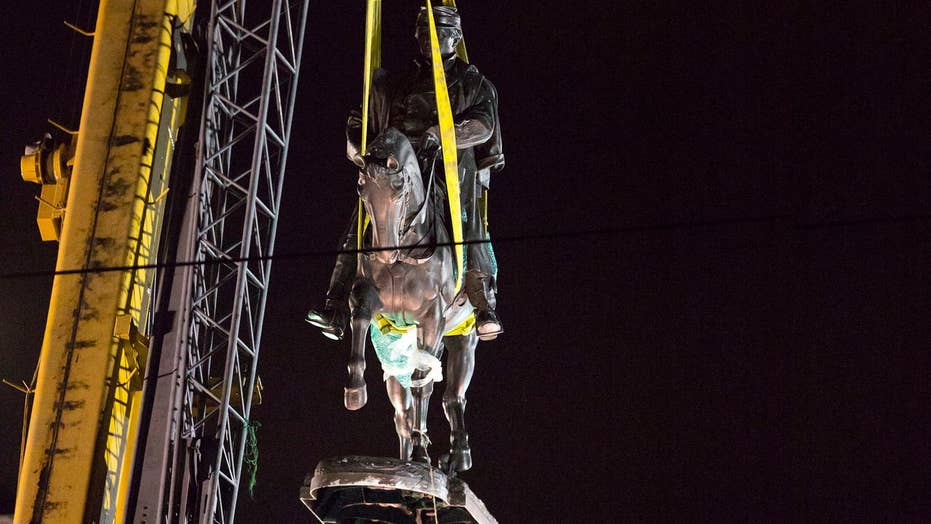 Statue of Confederate General P.G.T. Beauregard taken down over night

The statue of Gen. P.G.T. Beauregard on his horse was lifted off its base shortly after 3 a.m., Fox 8 reported.

Many historians have considered Beauregard the first notable general of the Confederate Army during the Civil War.

This was the third Confederate-era memorial the city has removed; officials have pledged to take down a monument of Robert E. Lee as well. The city has not given a time frame for Lee’s removal due to “intimidation, threats, and violence, serious safety concerns remain.”

“Today we take another step in defining our city not by our past but by our bright future,” New Orleans Mayor Mitch Landrieu said in a news release. “While we must honor our history, we will not allow the Confederacy to be put on a pedestal in the heart of New Orleans.”

Landrieu called for the memorials to be removed following the emotional aftermath of the Charleston church shootings. Dylann Roof, an avowed racist, shot and killed nine black parishioners at the Emanuel African Methodist Episcopal Church.

Shortly after the massacre, a website Roof made was discovered. The website contained pictures of the killer posing with the Confederate battle flag in photos, recharging the debate over whether Confederate emblems represent racism or an honorable heritage.

The City Council voted 6-1 in 2015 to remove the monuments after a succession of contentious public meetings where impassioned monument supporters and opponents heckled each other. Contractors involved in the removal process were threatened and the work stalled for months as monument supporters looked to the courts for help.

Monument workers covered their faces and wore bulletproof vests and helmets for safety while removing the first two memorials of The White Rebellion and Jefferson Davis. On Wednesday, the workers still wore helmets and covered their face during the removal process but the scene was more subdued.

Last month, during the removal of The White Rebellion, police arrested multiple protesters who were charged with disturbing the peace after a scuffle occurred at an event celebrating the removal of the memorial.

“Mayor Landrieu’s actions are an insult to New Orleanians who came before us-the veterans widows, parents, children and citizens-who donated their personal money to build and place these monuments where they stand to honor the memory of their fallen family members,” said Pierre McGraw, President of the Monument Task Committee which has been advocating to keep the monuments.

But for many in this majority black city, the monuments represent a shameful part of the city and country’s history, and pay honor to a history of slavery and segregation.

The statues may be placed in a museum or another site at some point, “where they can be placed in their proper historical context from a dark period of American history,” city spokesman Tyronne Walker said.