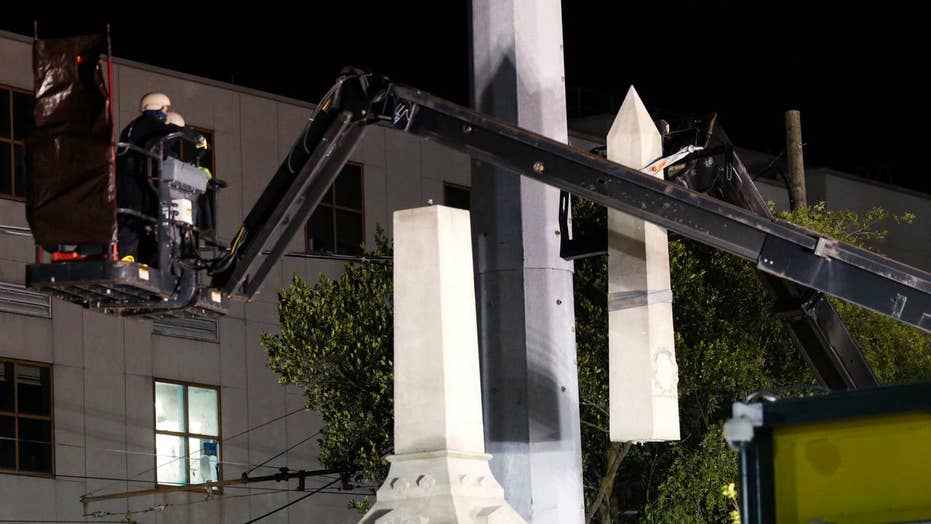 New Orleans removed the first of four prominent Confederate monuments under the cover of darkness early Monday, the latest Southern city to sever itself from symbols viewed by many as a representation of racism and white supremacy.

Truckers arrived at around 1:25 a.m. to begin removing the Liberty Monument, which commemorates whites who tried to topple a biracial post-Civil War government in New Orleans. The workers started early in an attempt to avoid disruption from supporters who want the monuments to stay. Some have even made death threats, according to officials.

New Orleans Mayor Mitch Landrieu said the Liberty Monument was the “most offensive” of the four set to be taken down. He added it was erected to “revere white supremacy.”

"If there was ever a statue that needed to be taken down, it's that one," he said.

Workers who were inspecting the statue ahead of its removal could be seen wearing flak jackets and helmets. Police officers watched the area from atop the parking garage of a nearby hotel.

Men with helmets and what appears to be bullet proof vests tearing away crumbling sign on Liberty Monument. @FOX8NOLA pic.twitter.com/As2HcDruLe

Three other statues to Confederate Generals Robert E. Lee and P.G.T. Beauregard and Confederate States of America President Jefferson Davis will be removed in later days now that legal challenges have been overcome.

"There's a better way to use the property these monuments are on and a way that better reflects who we are," Landrieu said Sunday.

New Orleans is a majority African-American city although the number of black residents has fallen since 2005's Hurricane Katrina drove many people from the city.

The majority black City Council in 2015 voted 6-1 to approve plans to take the statues down, but legal battles over their fate have prevented the removal until now, said Landrieu, who proposed the monuments' removal and rode to victory twice with overwhelming support from the city's black residents.

People who want the Confederate memorials removed say they are offensive artifacts honoring the region's slave-owning past. But others call the monuments part of the city's history and say they should be protected historic structures.

Landrieu said the memorials don't represent his city as it approaches its 300th anniversary next year. The mayor said the city would remove the monuments, store them and preserve them until an "appropriate" place to display them is determined.

"The monuments are an aberration," he said. "They're actually a denial of our history and they were done in a time when people who still controlled the Confederacy were in charge of this city and it only represents a four-year period in our 1000-year march to where we are today.

Nationally, the debate over Confederate symbols has become heated since nine parishioners were killed at a black church in South Carolina in June 2015. South Carolina removed the Confederate flag from its statehouse grounds in the weeks after, and several Southern cities have since considered removing monuments. The University of Mississippi took down its state flag because it includes the Confederate emblem.