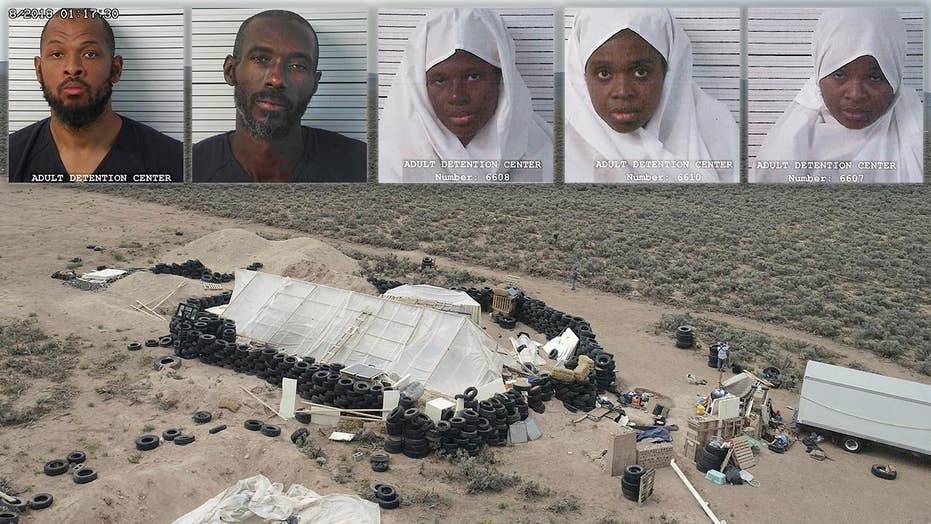 State judge sets $20,000 bail for five defendants arrested at a compound where authorities say children were being trained to conduct school shootings; William La Jeunesse reports on the controversial decision.

The state judge who on Monday set a $20,000 bail for five defendants arrested at a remote New Mexico compound where authorities say children were being trained to conduct school shootings has a history of issuing low bail to violent offenders.

Judge Sarah Backus, an elected Democrat, ordered the two men and three women to wear ankle monitors, have weekly contact with their attorneys and not consume alcohol or own firearms while on bail. She said although she was concerned by “troubling facts,” prosecutors failed to articulate any specific threats to the community.

The five suspects were arrested more than a week ago when police raided a squalid makeshift living structure near the Colorado state line in response to a report of children living in filth, severe hunger and dangers including a leaky propane tank. The 11 children found at the compound were placed in state custody.

Prosecutors on Monday said Siraj Ibn Wahhaj provided some of the children with firearms training – including tactical skills such as “speed loading” guns and firing while in motion.

“What I’ve heard here today is troubling, definitely. Troubling facts about numerous children in far from ideal circumstances and individuals who are living in a very unconventional way,” Backus said.

Just last month, she set a $10,000 bond for Rafael Orozco, a 24-year-old Taos man accused of battering his girlfriend, his newborn child and a health care worker at Holy Cross Hospital in September 2016.

Rafael Orozco is accused of prompting a lockdown at Holy Cross Hospital after allegedly attacking his girlfriend, newborn child and a health care worker.

Police said Orozco prompted a lockdown at the hospital after punching his girlfriend as she breastfed their newborn in front of a male doctor, the Santa Fe New Mexican reported. Cops said Orozco then grabbed the mother by the throat and slapped the baby.

Orozco reportedly fled the hospital and was arrested in Rio Arriba County a few months later. While in prison, Orozco was accused of other crimes, including obtaining Suboxone, an opioid medication, and pulling a fire alarm. A year later, he and his brother, Cristian Orozco, were charged with assaulting and threatening a guard.

In September, Backus approved an order to incarcerate Orozco at the Lea County Correctional Facility until his trial. His defense attorney recently filed a motion arguing for his release and last month, Backus ruled in his favor.

According to the New Mexico Courts website, Backus was first appointed to the bench in June 2011 by Republican Gov. Susana Martinez. She was elected to the post in 2012 and is expected to remain there until at least 2020.

Prior to her appointment to the bench, Backus – a graduate of the University of California Hastings College of the Law – served as a deputy public defender and deputy Attorney General in San Francisco. She's lived in Taos since 1994.

Martinez issued a statement after Monday’s hearing saying she “strongly disagreed” with the outcome and Backus’ decision.

“Unfortunately, it highlights how extreme the New Mexico Supreme Court has been in dictating pretrial release for all kinds of dangerous criminals,” she said.

Defendants Hujrah Wahhaj, left, and Siraj Wahhaj were among several people arrested after authorities raided a property and found 11 children living on a squalid compound on the outskirts of tiny Amalia, N.M. (AP)

Ryan Cangiolosi, chairman of the Republican Party of New Mexico, said Backus’ decision to release “suspected terrorists” into the community has put the people of the state at risk.

“By releasing these suspects without even requiring them to post bail, Judge Backus has put people in danger and created the risk that they could flee and harm other children and communities as well,” he said in a statement. “If New Mexico Democratic Party leaders are serious about keeping our state safe, they should join me in denouncing Judge Backus and the incredible failure of leadership and judgment demonstrated by her terrible decision.”

Elsewhere there was a swift social media backlash against Backus, with many calling for her resignation.

Despite being issued bail, however, Wahhaj is likely to remain locked up pending a warrant for his arrest in Georgia on accusations he abducted his own son, Abdul-ghani, from the boy's mother in December and fled to New Mexico. The four other defendants — Jany Leveille, Lucas Morton, Subhannah Wahhaj and Hujrah Wahhaj — may be released on house arrest as early as Tuesday.

Family members say the remains of a boy found at the compound last week are those of Wahhaj's disabled son, though state medical examiners have not yet identified the body conclusively. Taos County Sheriff Jerry Hogrefe testified Monday the remains of a young boy were found inside tunnels that had been dug from inside the compound to an opening 100 feet away.

Defense attorneys argued prosecutors were trying unjustly to paint their clients as armed militants. They also argued the rifles and handguns found on the property were common guns that could be bought at retail stores and the group made no aggressive effort to defend the compound.