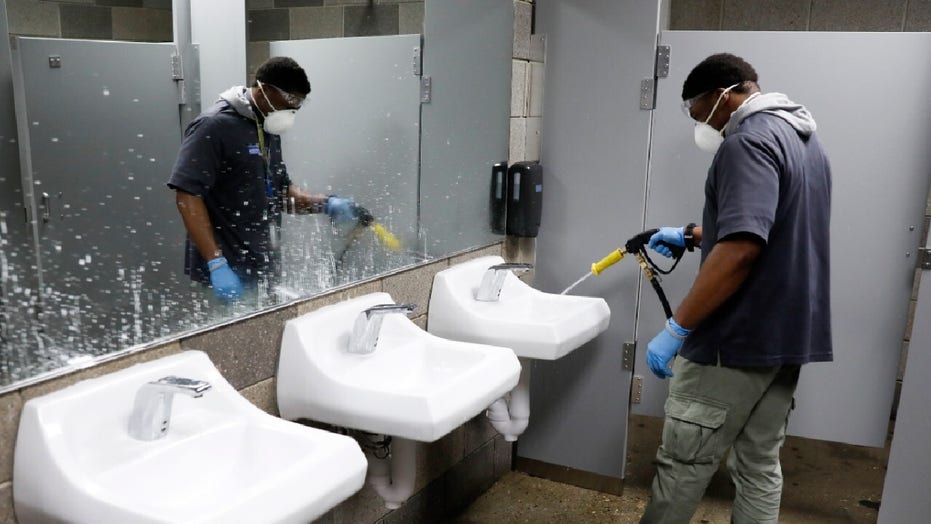 New Jersey residents seeking coronavirus tests inundated the state’s two drive-thru testing centers Monday, with one site reaching capacity before it even opened, as testing across the U.S. is hampered by a lack of supplies.

The site at Bergen Community College in Paramus stopped accepting patients for the day around 7:30 a.m. – 30 minutes before it opened, police and state officials said. The testing center opened Friday in Bergen County – the state's hardest-hit area – and has the capacity to conduct 2,500 tests a week, according to Gov. Phil Murphy.

A second drive-thru site at the PNC Bank Arts Center in Holmdel, central New Jersey, opened Monday and saw hundreds lining up for a test. A half-hour after opening at 8 a.m., the facility began turning residents away, the Asbury Park Press reported.

The testing center opened Friday in Bergen County – the state's hardest-hit area – and has the capacity to conduct 2,500 tests a week, according to Gov. Phil Murphy. (AP Photo/Seth Wenig)

Both sites are open seven days a week from 8 a.m. to 4 p.m., or while supplies last. A new site will open Tuesday at Hudson Regional Hospital in Secaucus. Only residents of the state who show symptoms qualify for a test.

On Monday, new coronavirus cases in New Jersey rose by 935, bringing the state total to 2,844, Murphy said, adding that seven more died from the disease.

“This increase is not a surprise – as we begin a more rigorous collection statewide, we’re getting a clearer and better sense of how far coronavirus has already spread,” he wrote on Twitter.

US CORONAVIRUS CASES SURPASS 35,000, NOW THE THIRD-HIGHEST INFECTED NATION IN THE WORLD

Drive-thru test sites have popped up in locations in more than 30 states — in state parks and parking lots, and next to medical centers and universities. The sites are dotted with tents and traffic cones. Medical personnel wearing masks, gloves and protective smocks take nose and throat swabs from those sitting in their cars or help them go inside for the test.

Vehicles lined up at a drive-through testing site for COVID-19 in Paramus, N.J., on Friday. (AP Photo/Seth Wenig)

New York state opened several centers last week, but shortages in protective equipment have led to testing only those who meet certain criteria such as hospitalization.

While some states have a few dozen drive-thru testing sites, others such as Montana have as few as one.

North Carolina is one of several states that are leaving it to the private sector to open test locations, while Rhode Island’s state health department is working in conjunction with health care organizations.

Supply shortages have shut down drive-thrus in several states, including Colorado, New Mexico, Virginia, Florida, Louisiana, Alabama, North Carolina, and Utah. One Las Vegas site was closed because it didn't have enough workers.

But even with visible symptoms and a doctor’s order, many people have waited hours or days for a test.