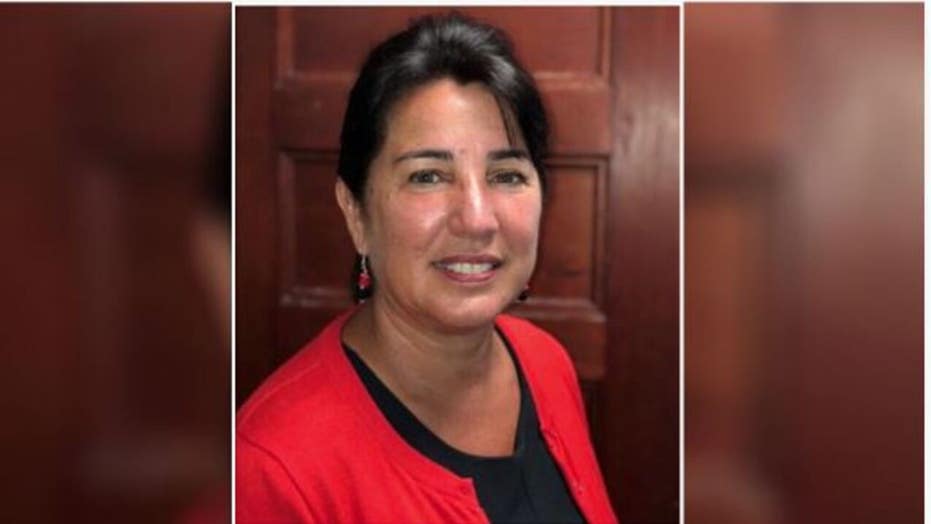 A Massachusetts school nurse was fatally shot in what authorities are investigating as a targeted attack by her former neighbor. Laurie Melchionda, 59, was shot dead in the entryway of her Braintree home in Norfolk County.

New details in the murder of a beloved Massachusetts woman include a fake UPS package and a wig disguise worn by the accused shooter and former neighbor.

Robert Bonang, the man charged with murder in the gruesome death of local school nurse and health director Laurie Melchionda, wore a gray wig, a surgical mask and brown clothing when he showed up at the woman’s house in Braintree around 10:45 a.m. Wednesday, according to prosecutors and a police report obtained by the Boston Globe.

Bonang, whom prosecutors said Thursday was described by a witness as looking like a “fake UPS driver,” approached Melchionda’s front door holding a box emblazoned with a “UPS” sticker, according to the report. But the witness – a teenager who was babysitting at the time – said the “weird” box wasn't typical for the company, the outlet reported.

Bonang was frantic as he rang the doorbell, the Globe reported. Someone screamed and the witness turned to find the gunman “shooting from the box,” according to the police report. Bonang is accused of shooting Melchionda in the head and back with a rifle when she opened the door, according to authorities.

After firing at Melchionda, 61-year-old Bonang wandered into her front yard, where he fired a second gun into the grass a half-dozen times, according to a witness statement in the police report.

Robert Bonang is accused of shooting Laurie Melchionda to death in Massachusetts June 17.

Authorities previously confirmed he was still at the scene when officers arrived. Investigators recovered a .22-caliber pistol, the wig, and the box Bonang was allegedly carrying, among other items, according to the outlet.

“The ‘UPS’ box was modified so that on the front of the box, there was a cutout, which exposed the muzzle,” the police report stated. “In the opposite corner of the box, the flap was cut to allow manipulation of the trigger. On the left side of the box, there were two ‘squares’ of cardboard, which were taped on the side, to allow a right handed shooter to grab the box with his ‘off hand.'”

The box, discarded by the front door, also reportedly featured interior cushioning “for the purpose of stabilizing the rifle,” the police report states.

Bonang was arrested and charged with murder, two counts of carrying a firearm without a license, discharging a firearm within 500 feet of a residence and unlawful possession of ammunition, a spokesperson for the district attorney’s office said.

Investigators have not released a motive in the attack.

He was ordered held without bail during his arraignment via videoconference on Thursday. He pleaded not guilty and told the judge he planned to hire private counsel, the district attorney’s office said.

A UPS spokesperson told Fox News Bonang has never been employed by the company.

Bonang used to live across the street from Melchionda, but moved roughly 20 miles away to Marshfield, Mass., according to a previous report from the Boston Globe. At times, the pair butted heads, Norfolk D.A. Michael Morrissey said Wednesday.

The police report described how Bonang had lived with his father, who died in 2014 at age 90.

He was “hardly ever was seen outside of the home, and was basically taken care of by his elderly father,” according to the Globe’s detailing of the report.

His sister had called the police twice in the past, in 2009 and 2014. In 2014, she asked police to have him committed after acting “delusional and exhibiting ‘paranoid behavior,’” the report states. And in 2009, she reportedly told police he had been “institutionalized” more than once.

Melchionda worked as the director of health services for Weston, Massachusett’s Public School system, and was also a local school nurse, Weston Public School Superintendent Midge Connolly wrote in a message on the system’s website.

“She was an incredibly dedicated healthcare professional and an outstanding person who gave her all to the communities she served,” Connolly wrote. “She embodied all of the positive traits of a high quality nurse … Laurie’s zest for life and love of her family were evident in all that she did and will always be cherished.”

Braintree Mayor Charles Kokoros described her as “a wonderful mother, wife, daughter, sister, aunt and friend to all who knew her, myself included.”

HALF-BROTHER OF BLACK MAN FOUND HANGED FROM TREE IN CALIFORNIA KILLED BY DEPUTIES IN SHOOTOUT: SHERIFF

“I know I speak for Superintendent Hackett and the School Committee when I say that Laurie dedicated her life to helping others,” Korokos wrote in a statement posted to the town’s Facebook page, “and her kindness and love will be sorely missed."