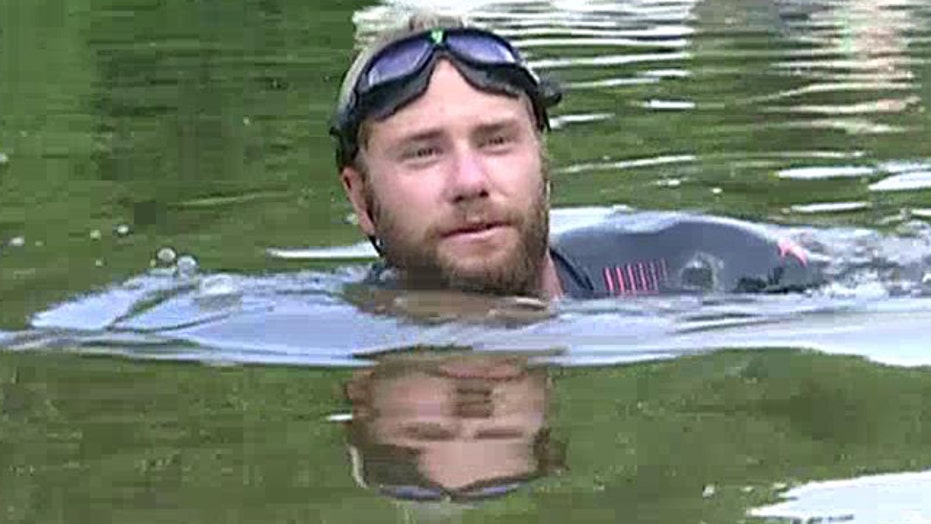 If all goes according to plan, Chris Ring, a 28-year-old Navy combat veteran, will become the first American to swim the length of the Mississippi River when he reaches the Gulf of Mexico early next month.

But for Ring, the achievement would be secondary to his larger goal: To raise awareness of so-called Gold Star Families, the designation given to loved ones of soldiers killed in combat.

"We all have what we have today because of these families and their loved ones," Ring told the Clarion-Ledger of Jackson, Miss. during a break from his exertions near Vicksburg. Ring said he had heard of people unknowingly congratulating families of fallen service members when hearing of their Gold Star status.

"And the [families are] like, 'Do you even know what that means?'" Ring told the paper. "And then they tell them and everyone's like, 'Oh, it's awkward,' and they want to walk away."

Such stories prompted Ring to partner with Legacies Alive, a nonprofit to support Gold Star Families. He began his swim on June 6 of this year at the source of the Mississippi River, Lake Itasca in Minnesota. By the time he reaches the Gulf, Ring will have swum 2,552 miles by the time he reaches the Gulf. Accompanied by a support team in a kayak, Ring averages 14 miles and 6.5 hours in the water each day, though he can make it up to 30 miles depending on the current and weather conditions.

At stops along the way, Ring is greeted by members of Gold Star Families, whom he encourages to sign the support team's kayaks.

"Every time I've had the opportunity to meet a family, it hits home more and more, and it makes me more steadfast and more dedicated to this cause every single day," he told the Clarion-Ledger. "They make me a part of their family, they invite me into their home, I stay with them, I hear their stories, and they have other children that really bond to us. It's so moving and powerful that they accept us and are so thankful for what we're doing."

A spokeswoman for Legacies Alive told Reuters that Ring has been delayed on occasion by bad weather, but has otherwise persevered through illness, exhaustion and a shoulder injury. After he reaches the mouth of the river, Legacies Alive says Ring will be recognized at the Army-Navy football game in Philadelphia on Dec. 12.