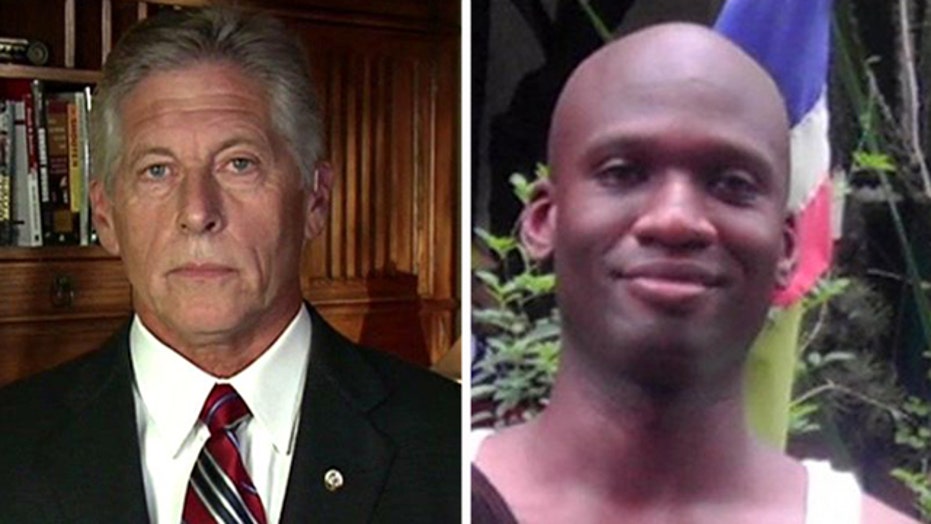 How did Navy Yard killer get access, despite red flags?

Red flags like a history of violent and mental illness were not enough to prevent Aaron Alexis from gaining security clearance to the Washington, D.C. Navy Yard building

Aaron Alexis, the Navy veteran who gunned down 12 people at a Washington military facility Monday, had his federal security clearance renewed just two months before his rampage, despite a disturbing history of psychological problems and violent behavior involving guns.

Although Alexis was not a direct employee of the federal government, working as an IT subcontractor required that he obtain “secret” clearance, according to Thomas Hoshko, of The Experts, a Hewlett Packard subcontractor working at the Washington Navy Yards. Alexis had previously worked for the company under clearance, but when he returned in July, another background check was conducted, Hoshko said.

"We had just recently re-hired him,” Hoshko told Reuters. “Another background investigation was re-run and cleared through the defense security service in July 2013."

Alexis, 34, went on a shooting spree early Monday at the Naval Sea Systems Command headquarters in southeast Washington, killing 12 and injuring eight before being killed by police. No motive had emerged as of Tuesday morning as to why he went on a rampage in the very complex where he worked. An FBI spokesperson said he entered the building with a valid pass and a shotgun, and then may have gained access to other firearms once inside.

It is not clear what that second background check consisted of, but just weeks earlier, Alexis’ roommate in Fort Worth filed a criminal complaint with the police after becoming suspicious that Alexis had tampered with his car’s fuel tank.

According to a criminal mischief complaint filed on July 5, Alexis’ roommate told Fort Worth police that his “roommate put [an] unknown substance in gas tank to damage vehicle.”

Someone in the neighborhood remembered seeing the man now known as Alexis's roommate speak with the cops before getting his car towed. This person told FoxNews.com the victim said his car wouldn't start because somebody put something in this gas tank.

That was far from the only brush with the law for Alexis, who reportedly heard voices in his head and was being treated for extreme paranoia when the mass shooting occurred. He had two firearms-related arrests in two different states—neither of which resulted in prosecution.

In 2004, Alexis shot out the tires of a car belonging to construction workers next door to his grandmother’s home in what he described to police as “an anger-fueled blackout.”

A witness told police Alexis had “stared at construction workers every morning for 30 days prior to the shooting. He displayed his gun when he walked to his car but the suspect never spoke,” according to a police report. The owner of the car Alexis shot up told police that “neither prior provocation nor words were exchanged between he and Alexis.”

Alexis confessed to discharging his .45 caliber Glock and said “he perceived the victim had mocked him earlier that morning after he discovered his own vehicle had been tampered with.”

He was arrested by cops on the charges of discharge of a firearm and property damage, but  never prosecuted after agreeing to avoid contact with the victim.

In 2008, he was arrested in Dekalb County, Ga., after causing a disturbance inside a club. According to a police report obtained by FoxNews.com, he was asked to leave a club "for causing damage to furnishings. Once outside suspect began using profanity...and would not stop. Was told several times," the report stated.

In Fort Worth in 2010, Alexis was involved in another shooting incident, this time at his home, where he, according to police reports, shot through the ceiling and into his upstairs neighbor’s apartment, “terrifying her.”

According to a Nov. 4, 2010 police report, a neighbor of Alexis said she was sitting in a chair and heard a loud pop, saw dust and then holes in both her ceiling and floor. She said her downstairs neighbor Alexis had called cops on her several times for being loud but police always said they didn’t hear anything and no further action was taken. The neighbor told police that days before Alexis had confronted her in the parking lot about making too much noise.  The woman “told me that she is terrified of Aaron and feels that this was done intentionally,” an officer wrote in the report.

The police officer knocked on Alexis’s door but he wouldn’t immediately answer. Eventually, Alexis came outside and told police he’d been cleaning his gun when it went off by accident.

“He said that he was trying to clean his gun while cooking and that his hands were slippery,” the police report stated. “He told me that he began to take the gun apart when his hands slipped and pulled the trigger discharging a round into the ceiling. While inside the apt I looked at the gun which was taken apart at this time. A gun cleaning kit was located next to the gun and the gun was covered in oil.”

Alexis told cops he didn’t notify anyone or check on neighbors after firing the shot because he “didn’t think it went all the way through since he couldn’t see any light through the hole” and he assumed people would think the noise was a firecracker.

Alexis was arrested but prosecutors declined to press charges.

To reach this reporter email jana.winter@foxnews.com