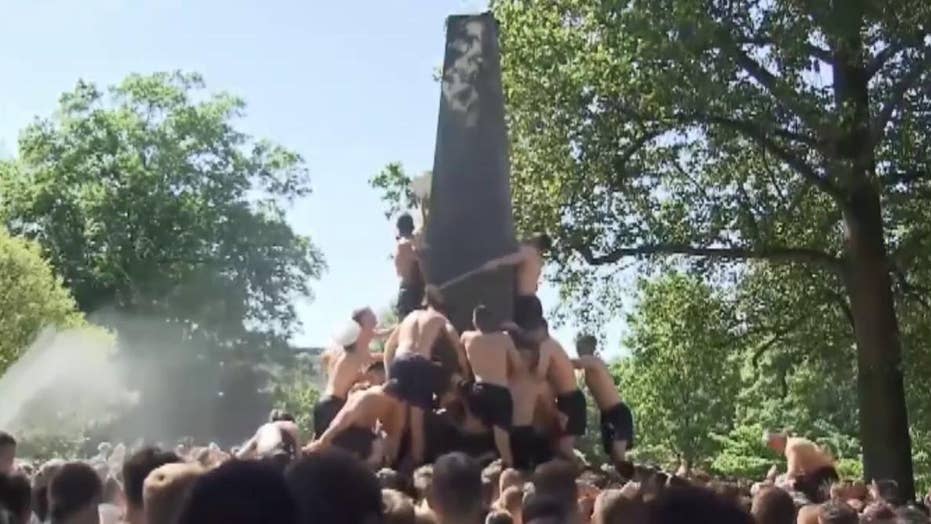 First year students at the Annapolis Naval Academy climb the greased obelisk on the school’s ground. A tradition dating back to 1940.

With teamwork and perseverance, the students formed a human pyramid to help classmates climb the slippery monument and replace the hat known as the “Dixie cup” from the top of the monument with a midshipmen’s hat, marking the end of the plebe year.

Peter Rossi of Phoenix capped the 21-foot obelisk slathered with vegetable shortening. It was done in 2 hours, 9 minutes and 35 seconds.

Last year’s class accomplished the feat in exactly two hours, 21 minutes, and 21 seconds while the previous class completed it in one hour, 12 minutes and 30 seconds, Fox 5 DC reported.

The class of 1962 climbed up the obelisk in 12 minutes — the first recorded time, reported The Washington Post. The class of 1972 has the fastest time at 1 minute 30 seconds — but no grease was used that year. The class of 1998 has the slowest time, taking 4 hours, 5 minutes and 17 seconds to finish because upperclassmen glued and taped the Dixie cup hat to the top.

According to legend, The Post reported, the plebe who sets the upperclassman’s hat at the monument’s peak is destined to become the first admiral in the class. So far this legend has yet to become reality.