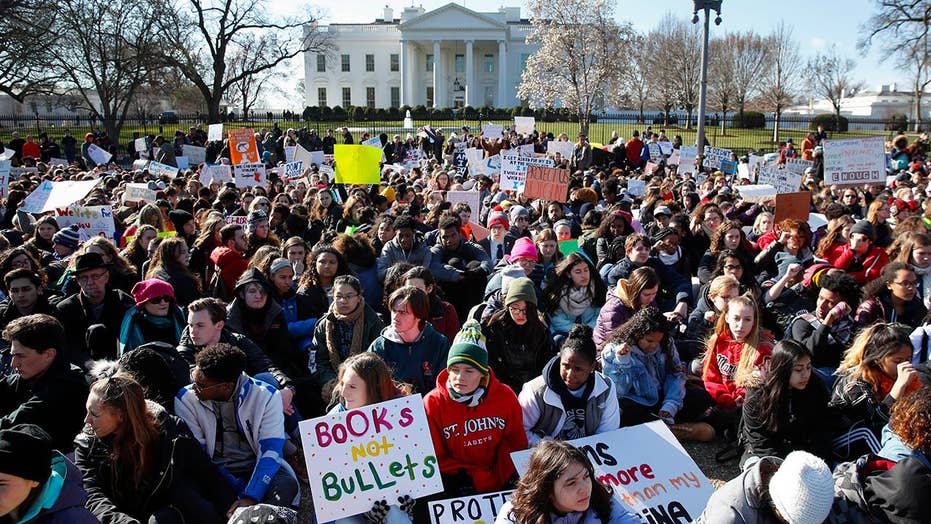 Protesting students walked out of classrooms across the country to demand safer schools and stricter gun control; Phil Keating reports from Ft. Lauderdale.

When news of the Parkland school shooting first broke, it resonated with 17-year-old Naomi Giancola.

A junior at Midwood High School in Brooklyn, New York – some 1,200 miles away from Marjory Stoneman Douglas, the Florida high school where a gunman murdered 17 students and faculty on Feb. 14 – Giancola immediately thought the tragedy could have easily happened at her own school.

So along with 16-year-old Madeline Paterna, Giancola arranged for her school to participate in the National School Walkout, a protest led by students demanding action against gun violence, on March 14 – one month after the Parkland school shooting.

“It was really scary to think that could have been us, and I just wanted to do something because I don’t want it to happen again," Giancola said.

What is the National School Walkout?

For at least 17 minutes at 10 a.m. across each time zone on March 14, students, school faculty and supporters around the world will walk out of their schools to honor those killed in the massacre at the Parkland high school earlier this year and to protest gun violence.

Those participating are encouraged to wear orange – the color used by many who support gun control. And some schools will even have featured speakers who are calling on Congress to pass gun control measures.

Those at Midwood High will gather at a nearby park to have a moment of silence as the names of the 17 Parkland victims are read aloud. There will also be an opportunity for those to share a poem, song or words of encouragement.

"All we want to do is honor these people’s lives."

“It’s important for everyone to realize that although it is about guns and it’s political, it’s more to commemorate the lives lost,” Giancola said. “At this point … all we want to do is honor these people’s lives.”

Paterna added that she wanted to “speak out for all the people who died” in the shooting.

“Us as students have to speak out about it and try to get our voices heard because I personally can’t imagine losing 17 people that I know in a school community,” Paterna told Fox News.

Students at Midwood High School and Packer Collegiate Institute, also in Brooklyn, have expressed concern that a gunman could enter a school at any time. And those students have also lamented a lack of protection.

“As school shootings have become more common, if a shooter, God forbid, got into the school, there’s really no protection for students,” Sarah Desouza, a 17-year-old senior at Packer Collegiate, told Fox News.

Her peer, Drew Myers, noted that the school has lockdown drills about three times a semester. And it’s in those drills that he said he feels “helpless.”

“Seeing school shootings happen over and over again just really drives home the point that it seems so easy for these people to commit these acts, and you feel helpless in the drills because there’s nothing you can do,” Myers said, adding that he does not support arming teachers, a proposal put forth by the White House.

Who organized the walkout?

Women’s March Youth EMPOWER, the organizers of the March 14 demonstration, say the walkout is to “protest Congress’ inaction to do more than tweet thoughts and prayers in response to the gun violence plaguing our schools and neighborhoods.”

“Students and staff have the right to teach and learn in an environment free from the worry of being gunned down in their classrooms or on their way home from school,” the event page said.

Cate Whitman, a 17-year-old student at New York City’s LaGuardia High School, partnered with the Women’s March to help plan the walkout. She said she hopes the protest will shed light on the issue of gun violence in general.

“I’m hoping it will bring more focus to the larger issue of gun violence as a whole because gun violence is something that affects people from all walks of life, all over the country, and disproportionately black and brown communities," Whitman told Fox News. “These things happen all the time in tons of communities, and I’m hoping that people start talking about it in an intersectional way.”

The Women’s March has asked that “all actions be inclusive & non-violent” during the walkouts.

How many schools are participating?

More than 185,000 students are expected to participate in the walkout, according to the latest numbers provided by a Women’s March spokesperson. And a map of participating schools on the event’s website shows the walkout has gone international – with schools in Ireland, Israel and Mexico participating.

Multiple colleges and universities have said they will not reject students who participate in the protests and walkouts, Reuters reported.

“Yale will NOT be rescinding anyone’s admission decision for participating in peaceful walkouts for this or other causes, regardless of any high school’s disciplinary policy,” Hannah Mendlowitz, the senior assistant director of admissions and director of recruitment for Yale University, said in a blog post. “I, for one, will be cheering these students on from New Haven.”

Students at Packer Collegiate Institute, an independent college preparatory school in Brooklyn Heights, credited the survivors of the Parkland shooting for their own activism and involvement in the walkout.

Myers said the survivors’ immediate advocacy, including meeting face-to-face with lawmakers and participating in town halls, was “truly inspirational.”

“It’s really inspiring that they’re taking action especially after something so tragic happened,” Desouza added. “It makes me want to contribute any way I can.”

College students at Georgetown University in Washington, D.C., also plan to participate in the walkout. Additionally, Students of Georgetown Inc. ("The Corp"), a student-run non-profit, will close its businesses for 17 minutes, Ricardo Mondolfi, a junior international politics major and chairman of "The Corp," told Fox News.

But some students don’t plan to participate in the walkout. Will Walker, a 16-year-old sophomore at Cadillac High School in Michigan, told HuffPost he will continue with his school work – even if the teacher leaves the classroom.

“I don’t think we’re going to solve anything by walking out of the classroom,” Walker told HuffPost. “I am in full support of stopping school shootings, but that’s not what the people are going out there [for] … They’re trying to stop people from being able to have guns.”

How are non-students showing support?

Congressional leaders and pastors are among those who will participate or show solidarity with students during the walkout.

Pastor Touré Roberts of The Potter’s House plans to join students at East High School in Denver for a moment of silence. He is also dedicating a Palm Sunday service to hear from students and give them an opportunity to speak to law enforcement personnel, local politicians and public school officials.

“We want to encourage them and let them know we hear them. We don’t want them to live in fear and literally be terrorized,” Roberts told Fox News. “We want [students] to know that they matter.”

MTV also plans to go dark for 17 minutes on March 14 at 10 am “to pay tribute to the 17 lives lost in the Parkland shooting and honor young victims of gun violence,” the station said in a statement to Fox News. Between March 14 and March 24, when the "March For Our Lives" rallies will be held, MTV also plans to change its logos across its platforms to orange.

How do I know if my school is participating?

To find out if your school is participating, plug in your zip code and check out the map on the Women’s March website.

Another nationwide school walkout is scheduled for April 20, the 19th anniversary of the Columbine High School massacre. A spokesperson for this walkout confirmed to Fox News that it is not “directly affiliated” with the March event.

And on March 24, "March for Our Lives" rallies are scheduled nationwide for demonstrators to protest gun violence.