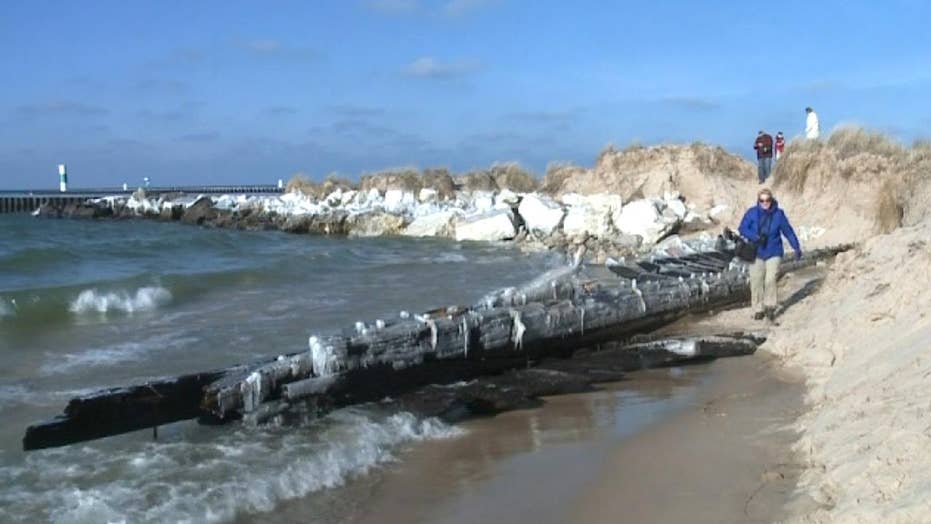 Curious visitors trek to see the remains of a mystery shipwreck at White Lake channel in Michigan.

A mystery shipwreck uncovered in a Michigan channel this week has residents and researchers alike trying to figure out where the doomed vessel came from.

Dozens of observers have flocked to the White Lake channel near the White River Light Station to see the shipwreck after photos emerged on social media earlier this week showing a partially deteriorated wooden hull coated with ice.

"[It's] a small piece of history that we're able to take part of," a couple told FOX17 West Michigan on Monday.

Some residents believe the wreck may be the remnants of the L.C. Woodruff, which was built in 1866 and fell apart during a bad storm in 1878 near White River Light Station on Lake Michigan, according to the U.S. Lighthouse Society.

It’s unclear, however, to what century the wreckage dates.

"We're piggy-backing on earlier accounts where people have perhaps jumped to conclusions and named it Woodruff," Valerie van Heest, the Michigan Shipwreck Research Association president, told FOX17. "But really, until we do an archaeological investigation can we really start to narrow it down."

Others have reported seeing a shipwreck believed to be the Woodruff in 1942 and again in 1974 near the White River Light Station after changing currents washed away enough sand to unearth what’s left of the vessel. The sightings were of damaged ribs and keel.

Van Heest said those who wish to see the wreckage should do so soon before another storm rolls through the area.

"The sands are shifting, big storms will move large bodies of sand then reveal things," van Heest said. "This may be gone with the next storm. It's a small window in time where we can look at these ships, the remains of these ships."