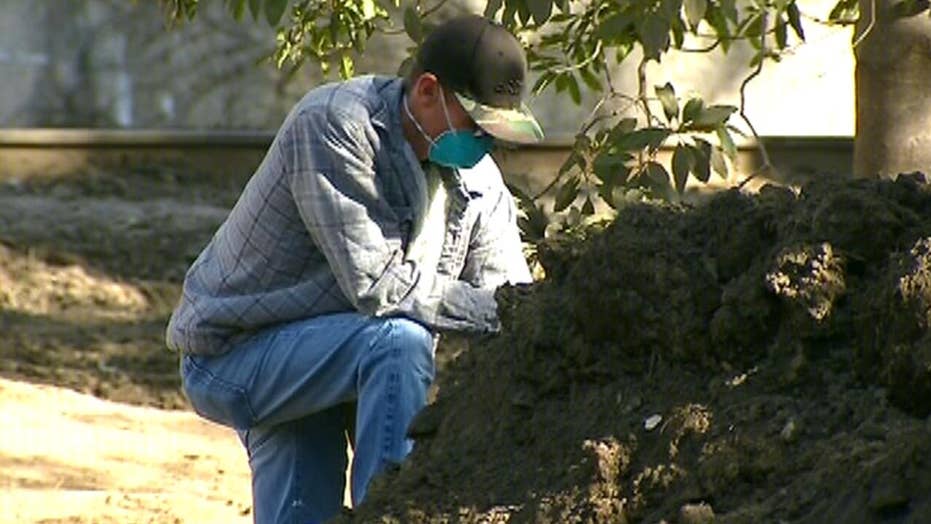 Erin Doherty went to the mud-caked beaches of Montecito, Calif. with her husband to see firsthand the damage caused by a massive mudslide that ravaged this seaside town near the city of Santa Barbara. She discovered she could help those who lost nearly everything get back cherished family mementos.

The 36-year-old Doherty was walking along the shore after the Jan. 9 natural disaster when something stuck in the mud caught her eye.

“It was this silk pouch that was soaked with mud,” she says to Fox News. “I opened it up and found these beautiful earrings.”

“I thought, ‘these must belong to someone,’” she adds. “I thought maybe if I posted it on social media, I could find out who they belonged to.”

Doherty started a Facebook group page called Montecito Disaster Lost and Found and posted a picture of the earrings in the hopes that the rightful owner would reach out. Doherty said the image was shared 10,000 times across the social network. It didn’t take long for the sparkly blue earrings to be returned to the family of Alice and James Mitchell, a couple who perished in the mudslide.

A volunteer group has been combing the beaches and mud-strewn streets of Montecito and helping its residents recover family keepsakes lost in last month's disaster. (Erin Doherty)

The couple’s daughter, Kelly Mitchell Weimer, was on the beach looking for items when another woman mentioned the Facebook post. After hearing a description of the earrings, Weimer realized they were her mother’s.

Doherty said she was happy she was able to return them to her, as well as another cherished heirloom—a photo album with family photos that spanned decades.

“When I got that photo back, it brought tears to my eyes. I was in complete awe.”

It just meant the world to her to get back these things,” Doherty says. “At that point, she [Weimer] had just had her families ashes returned.”

“All she had left of her family at that point was their ashes and their dog’s collar.”

At least 21 people have died from the mudslides impacting the same area that was ravaged in December by the Thomas Fire, the state’s largest wildfire on record, according to the U.S. Forest Service.

Many of the mudslide deaths occurred in Montecito, where celebrities such as Ellen DeGeneres, Rob Lowe, and Oprah Winfrey, among others, call home. As of Jan. 23, many of the evacuation orders and warnings were lifted for parts of the city as search missions continued.

The lost and found group was started after Erin Doherty found these earrings on the beach and posted a picture of them on Facebook. (Erin Doherty)

In addition to the deaths and missing persons, several homes were destroyed from the mudslides, which were sparked after torrential rains caused flash flooding in the Santa Ynez Mountains. The flooding caused mud and debris to slide down from wildfire-charred hillsides that are stripped of vegetation, eventually reaching the communities below.

Inspired by Doherty’s creation of the Facebook group, others started posting pictures of items they found strewn on the beach and across town. Doherty also started organizing a 20-person volunteer search group to continue to find and recover items.

Nicknamed “Mud Angels,” the volunteer group has scoured the beaches and streets of Montecito to recover keepsakes out of the mud and debris. They have successfully returned over 100 items, like photos, jewelry and family keepsakes, to their rightful owners the past month.

“It’s amazing the things that are being found,” she said. “Even if these people were able to get away with their lives, they have nothing. Their homes were destroyed.”

Doherty said that that most of the victims of the Montecito disaster are grateful when they are reunited with their cherished items.

“They are unbelievably grateful,” she says. “Sometimes it gets really emotional.”

Erin Doherty said the items that people are most grateful to have returned are family photographs.

“You look towards these things to hold onto memories.”

Doherty said the items that people are most grateful to have returned are family photographs.

Jodi Goldberg was grateful when she had a photo of her and her daughter when she was a young girl returned by Doherty’s group.

“When I got that photo back, it brought tears to my eyes,” Goldberg, whose home was destroyed in the mudslide, said to Fox News. “I was in complete awe.”

“I always had so many family photos across my house,” she added. “At least I was able to get a little piece of that back.”

Doherty now organizes a team of over 20 volunteers. In the past month, they have recovered and returned over 100 items. (Erin Doherty)

Goldberg said Doherty’s selflessness and desire to help others has given her and others affected by this tragedy a sense of hope.

“It’s the littlest things that make people feel hope,” she said. “It’s devastating to lose everything in five minutes, but the most important thing in life is family and love.”

Doherty said she is happy to do what she can to help others and hopes she can continue helping Montecito victims recover.

“It really runs the spectrum,” she said of Montecito. “This place will be devastated for a long time… People like Oprah are going to be fine. She’ll be able to stay here while people like Oprah’s gardener probably won’t be able to.”