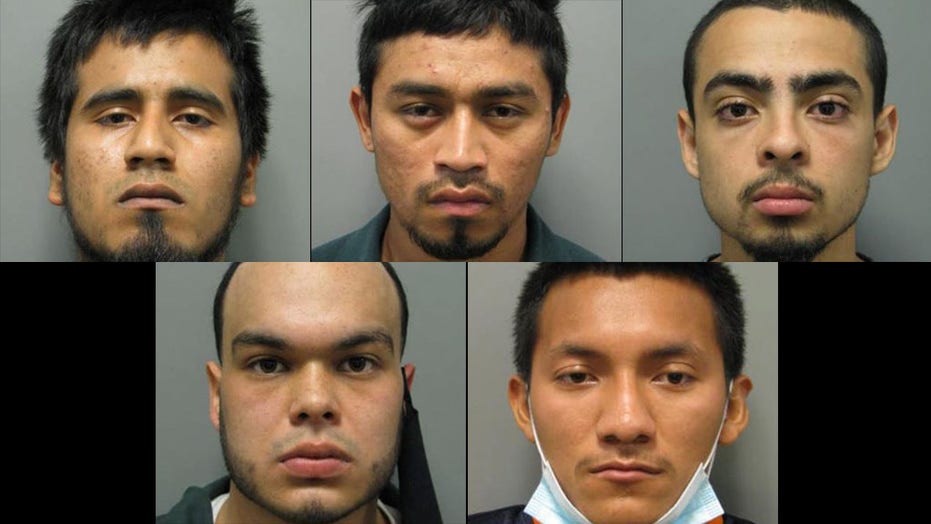 Five members of the violent MS-13 street gang -- four who are in the country illegally -- have been accused of gunning down a Maryland man who was ambushed as he left his home to go to work.

Their arrests in the May 26 shooting death of Francisco Anton Medrano-Campos, 29, were announced Wednesday, according to reports. Police said two gunmen were lying in wait for Medrano-Campos that morning when he emerged from his Wheaton apartment just outside Washington.

Montgomery Couty police said Medrano-Campos had no connections to MS-13 or any other gang, according to The Washington Post which was the first to report key details on the arrests and the link to the gang.

“By all accounts, he was a hard-working guy who was headed to work that morning,” Capt. Edward Pallas, commander of the major crimes unit, told the Post.

The victim shared an apartment until January with Carlos Andres Orellana, 21, one of the men accused of his murder, WJLA-TV reported.

That’s when Orellana left, unable to the pay the rent.

Police say the gang targeted Medrano-Campos after he beat Orellana with a lead pipe for stealing cash, a PlayStation and an Xbox from him after moving out, the station reported.

Orellana was arrested the day after the murder, the station reported.

In custody, he told police he held no grudge against Medrano-Campos for the beating, which he said was over a girl, according to the station.

The other suspects all from Maryland were arrested June 5. Police identified them as Daniel Huezo-Landaverde, 19, of Silver Spring; Oscar Effrain Zavala-Urrea, 19, of Fairland; Romeo Almengor Oxlaj-Lopez, 20, of Glenmont; and Victor Alfonso Cruz-Orellana, 21, of Glenmont.

All four had entered the country as unaccompanied minors, according to ICE, which also reported that two of the men, Orellana and Oxlaj-Lopez, have skipped immigration hearings.