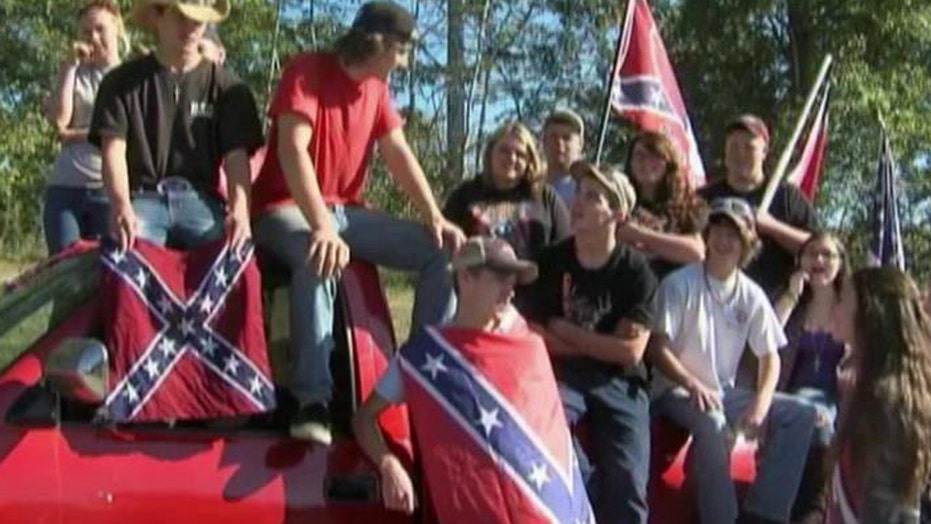 Virginia teens say they are fighting for their heritage

More than 20 western Virginia high school students were suspended Thursday after holding a rally to protest a new policy banning vehicles with Confederate flag symbols from the school parking lot and refusing to take off clothing displaying the symbol.

Christiansburg High School Senior Houston Miller, who organized the rally, said he doesn't believe the administration should be able to tell students what they can wear or put on their vehicle. He said he doesn't intend to back down and is encouraging more students to show their support for the flag Friday.

"I feel like I should have the right to wear whatever I want, and I'm standing up for this," Miller said.

The dress code at the school in Christiansburg — south of Blacksburg along Interstate 81 — prohibits students from wearing articles that reflect adversely on people because of race, gender, or other factors. A new policy this fall bans students from having Confederate symbols on their vehicles in the parking lot.

Confederate symbols have come under increased public scrutiny since the June 17 massacre of nine black worshippers at a church in Charleston, South Carolina. Dylann Roof, the white man charged in the slayings, had been photographed holding the Confederate battle flag.

The 21 students who refused to remove their Confederate flag clothing were initially given in-school suspensions, said Brenda Drake, a spokeswoman for Montgomery County Public Schools. But 15 of them were sent home for the day after being loud and disruptive. Another two students were suspended for additional days.

Drake said the school values the students' First Amendment rights but has to maintain a safe and orderly environment. She said "incidents of racial tension" at the school have made the ban necessary but did not specify what the incidents were and didn't immediately respond to further requests for comment.

Of the school's 1,100 students, 83 percent are white and 8 percent are black, state data show.

"We are not issuing a judgment on the flag, but know that not allowing it at CHS supports a peaceful educational environment in the building," Drake said in a statement. "Continued racial friction suggests that lifting the ban of this particular symbol would cause significant disruption at the school."

Senior Morgan Willis attended the rally but decided to comply with the rules because she feared a suspension would prevent her from representing the school at an event this weekend. She had a Confederate flag draped across the top of her car until she was told on the first day of class to remove it, she said.

Willis said that for her and for other students, the flag is central to their Southern heritage.

"I understand some people take it as hate, but none of us out there were racist or anything," Willis said. "I don't see it as hate. If I did, I wouldn't own it. I see it as this is your Southern heritage, and if you can't have that, then what can you have?"

The new policy regarding Confederate flags on cars has also angered some parents, including Josh Akers, whose child attends the grade school in the school district. He started an online petition that has more than 1,200 supporters urging the school board to reverse the policy.

Richmond-based Attorney Jonathan Arthur said he has been talking to some of the students about potentially filing a lawsuit against the school, arguing that they have a Constitutionally-protected right to wear clothing emblazoned the flag.

Douglas Mertz, an attorney in Juneau, Alaska, who works on civil rights cases, said the courts have been divided over the issue. It often comes down to whether the school can point to concrete and specific problems that the symbol has caused, like a fight that broke out between students.

"The Supreme Court has said that you don't speculate that there might be a substantial impact on the education process. It has got to be really clear," Mertz said. "School officials can't simply go in with the belief that symbols are trouble and therefore can be banned," he said.