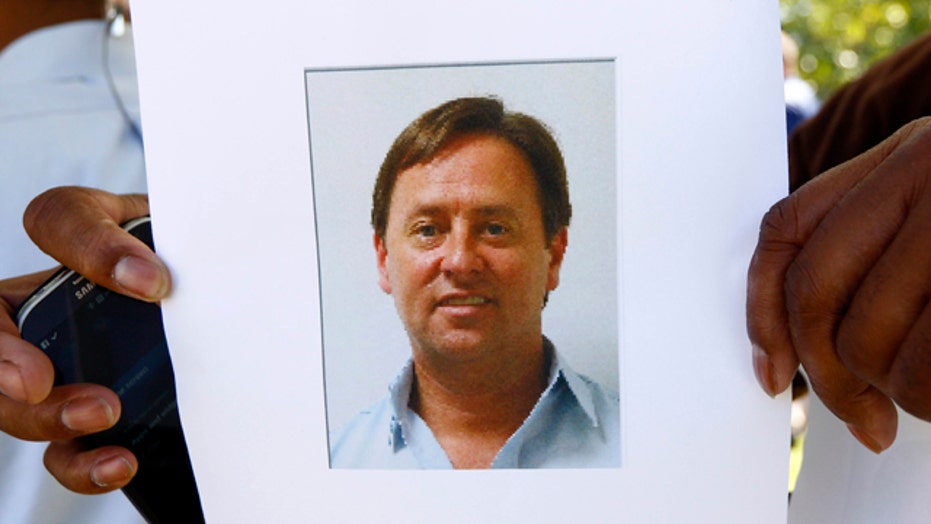 An instructor at Mississippi's Delta State University suspected of killing the woman he lived with and a colleague -- possibly as the result of a love triangle -- died of a self-inflicted gunshot wound late Monday, authorities said.

Local media, citing the Washington County Sheriff's office and other agencies, reported that Shannon Lamb, 45, was being chased by police in his black Dodge Avenger on Highway 1 near Greenville when he pulled the car over, bailed out on foot, and ran into some woods along the side of the road. Lamb had earlier spoken to police, telling them "he's not going to jail."

Delta State University police chief Lynn Buford told the Associated Press that the pursuing officers heard a single gunshot before finding Lamb wounded. The suspect was taken to a local hospital where he was pronounced dead.

Cleveland Police Chief Charles "Buster" Bingham told reporters that Lamb was returning from Arkansas when a license plate reader picked up his plate as he crossed a bridge over the Mississippi River. Bingham said police followed Lamb but did not try to apprehend him, and were waiting for backup to pursue Lamb on foot when they heard a single shot. When backup arrived, they searched and found Lamb with a gunshot wound to the head.

Late Monday, the university lifted a campus lockdown that had been in place since Lamb allegedly shot and killed Professor Ethan Schmidt, 39, as Schmidt sat at his desk in a university office. The university said Tuesday classes were canceled and a candlelight vigil would be held in Schmidt's memory Tuesday evening.

"We're relieved that this tragedy is over," University President William LaForge told AP.

Police believe that hours before Lamb shot and killed Schmidt, he murdered his domestic partner, 41-year-old Amy Prentiss, at the home the couple shared in Gautier, Miss., approximately 300 miles from Delta State's campus in Cleveland.

Lamb, a geography and social science education instructor, allegedly believed Prentiss was also in a relationship with Schmidt. However, authorities early Tuesday declined to formally identify a motive for the crimes, saying there was "no information, no evidence" of a "love triangle."

Prentiss was described as a "good person" by Shawn O'Steen, who said he had been married to her for about seven years. The two divorced 15 years ago, but remained friends. O'Steen said he and Prentiss had a daughter, who is 19, and she was "devastated." He said Prentiss and her daughter were "absolutely best friends."

Prentiss worked an online job from her home, according to Linsday Knowles, identified as a close friend of Prentiss by the Sun Herald. Knowles said Prentiss, who had a hound dog named Lightning, had been dating Lamb for about three years.

"She always wanted to help other people," Knowles said.

Approximately an hour before Lamb died, Bingham denied the suspect had been in contact with law enforcement. That contradicted information given by Gautier Police Lt. Scott Wilson and another unidentified officer, who told a news conference they had spoken with Lamb and "he's not going to jail." The unidentified officer said anyone coming into contact with Lamb should use extreme caution. They did not elaborate on how or when they spoke with the suspect.

Lamb received a doctorate in education from Delta State University in the spring of 2015, according to his resume posted on the university's website. He started working there in 2009 and taught geography and education classes, and volunteered with Habitat for Humanity, according to the resume.

Delta State University tweeted about a Monday afternoon shooting on its campus. (The Bolivar Commercial)

Reports of Schmidt's shooting sent the campus into a lockdown Monday morning. Law enforcement personnel poured over the grounds in search of the gunman.

When asked how the shooter could escape the victim's building so quickly, Bingham said Schmidt's office was close to an exit and "it was not hard to leave the building rapidly."

Charlie King was in a history class down the hall from where the shooting occurred.

"A few minutes into the class, we heard these popping noises and we all went completely silent," he said.

Some people thought that it might be a desk or door closing or firecrackers, but King said he thought it sounded like gunshots. A few minutes later a police officer -- gun drawn -- burst into the windowless room and ordered everyone to get against the wall away from the door. Some people also hid in a storage closet, King said. The officer didn't explain what was going on, but King said the students understood.

"We put two and two together," he said. The professor gave the students chairs to throw if the shooter came in, said King's friend, Christopher Walker Todd.

Eventually police ushered the students into another building and questioned them about what they'd seen and how many shots they heard.

Freshman Noah Joyner, 18, was in his dorm building when reports of an active shooter began to spread. He hunkered down in a bathroom and heard others desperate to get in.

"There were like people banging on the doors to have somebody let them in," said Joyner, a swimmer at the college. "It was pretty terrifying."

"Everybody's phone just sort of went off at the same time," Abraham said. Then a staff member came in and told them that the campus was on lockdown.

"We discovered it was something very serious when we started getting text messages from people all over the world," he said.

Eventually, about two hours or so after the initial lockdown, about 25 heavily armed police officers swept through the building, Abraham said. All of the students were sent back to their dorms and other people such as faculty and students who live off campus were sent to the university's coliseum, Abraham said, though most were later allowed to leave

Schmidt graduated from the University of Kansas with a PhD in philosophy in 2007. He had taught at Delta State since August 2013. He previously served as an assistant professor and director of graduate studies at Texas Tech University, and was a lecturer and graduate teaching assistant at the University of Kansas. Schmidt wrote two books about Native Americans: “Native Americans in the American Revolution,” published in 2014, and “The Divided Dominion,” published in February 2015.

Schmidt was a member of numerous organizations at Delta State, including the Diversity Committee and the Student Success Task Force.

The 3,500-student university is in Mississippi's flat, agricultural region near the Arkansas state line. Cleveland is a city of about 12,000 people located 38 miles northeast of Greenville.