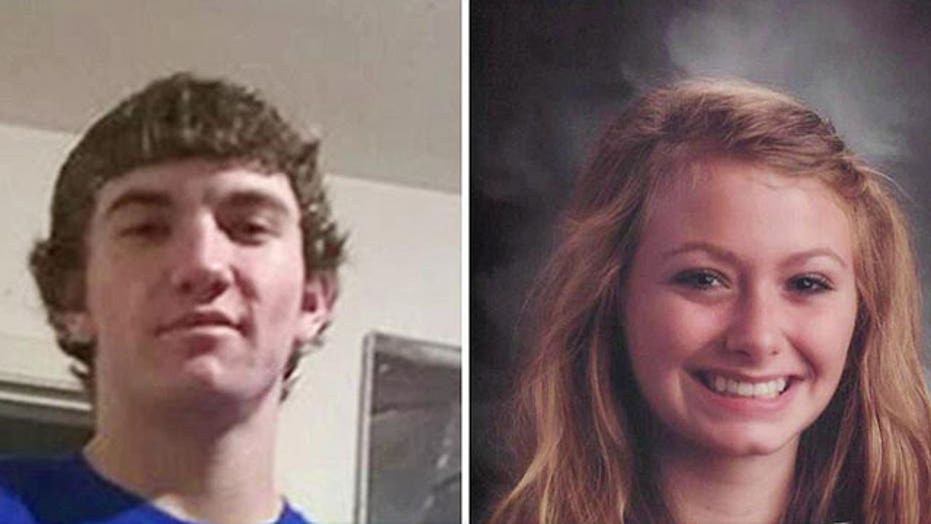 Modern-day 'Bonnie and Clyde' on the run from the law

Two teenagers who have blazed a trail of crime in the South were arrested Sunday morning in Panama City Beach, Florida, authorities said in a statement.

Law enforcement surrounded the truck and apprehended the two individuals without incident.

Hayes will make his first court appearance Monday in the Florida Panhandle. Hayes was being held Sunday in the Bay County jail on a charge of custodial interference.

Chaffins tells The Associated Press that he spoke with Hayes and the teen is "very scared" and wants to come home.

Phillips was placed in the care of Florida's Department of Children & Families, according to Panama City Beach Police. She will face the charges in juvenile court.

Hayes and Phillips vanished Jan. 3 from their small hometown in western Kentucky. Since then, the two left a path of stolen vehicles and pilfered checks and were spotted in Florida prior to their arrest. Authorities believe their travels took them to South Carolina and Georgia.

Hayes' mother, Tammy Martin, had urged her son and his companion to surrender and "face the consequences."

Martin said the couple had been dating for about three months. She said the girl portrayed herself as being 19, and the family, including Hayes, believed her.

Cheyenne "would go in and write checks, and she would come out with cigarettes and stuff, so I didn't have any reason not to believe she wasn't 19," Martin said. "Because normally you can't buy cigarettes when you're 13 years old.

By the time her son realized she was a mere 13, "he was already done in love with her," Martin said.

Hayes been on the run from burglary and theft charges in Kentucky stemming from an arrest late last year, according to Grayson County court records.

The teens had been able to evade Kentucky law enforcement after crashing their first truck they stole and hid in the woods, then stealing another truck nearby. Police believed the two were carrying weapons as well.

The two were spotted at a Walmart in South Carolina Monday, where the teens are thought to have passed two stolen checks, Manning, South Carolina, Police Chief Blair Shaffer said.

Authorities believe they then headed to Georgia and stole a pickup truck from the driveway of a man's home in Henry County, about 30 miles southeast of Atlanta. The homeowner awoke Wednesday to find his vehicle was gone, along with two handguns he kept inside, Henry County police Lt. Joey Smith said.

Hours later, another truck the couple are suspected of having stolen in another state was found nearby. It had been crashed through a fence and abandoned behind a vacant building on neighboring property, Smith said.

Martin said her son texted her a few days after their disappearance to say the couple were in Mississippi. They were spotted soon after that in Kentucky, she said.