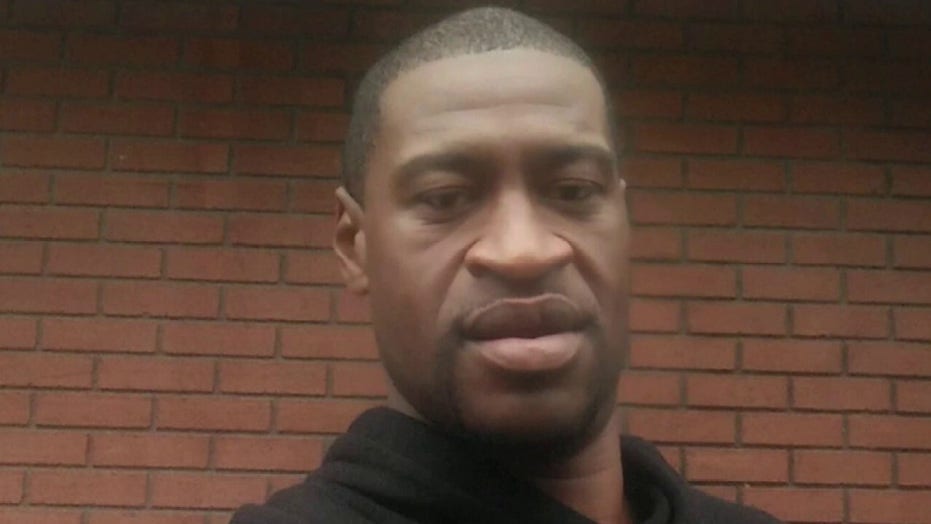 Minneapolis is grappling with a surge in crime as bodycam video of George Floyd's arrest is released to the public; Mike Tobin reports.

A man captured on surveillance video smashing windows at a Minneapolis AutoZone in the wake of George Floyd’s death is a Hells Angels member bent on stirring up social unrest, police said.

Nicknamed “Umbrella Man” for his all-black getup that included a hood, gas mask and black umbrella, police said the man’s actions led to arson -- the first of several that sent peaceful protests into chaos.

Police identified the 32-year-old suspect through a tip last week. Minneapolis police spokesman John Elder told the Associated Press Tuesday he could not confirm the name of the person involved, but said the investigation remains open and active.

A man poses in the parking lot of an AutoZone store in flames, while protesters hold a rally against the death of George Floyd in Minneapolis on May 27. (Carlos Gonzalez/Star Tribune via AP)

“This was the first fire that set off a string of fires and looting throughout the precinct and the rest of the city,” Minneapolis police arson investigator Erika Christensen wrote in a search warrant affidavit this week, according to the Star Tribune.

The riots spread to other parts of Minneapolis and St. Paul, and caused an estimated $500 million in damage. At least two people died — one a man who was fatally shot at a Minneapolis pawnshop and another whose burned body was found in the ruins of another pawnshop.

Floyd, a Black man, died May 25 after a white Minneapolis police officer named Derek Chauvin knelt on his neck for nearly nine minutes despite Floyd’s shouts that he could not breathe. Floyd was handcuffed at the time.

Sandra King, 70, waits for her granddaughter near the remains of AutoZone across from the Minneapolis 3rd Police Precinct in Minneapolis on May 28.  (Carlos Gonzalez/Star Tribune via AP)

Protests and riots flared throughout the country in the days, weeks and even months following news of his death.

A video taken two days after Floyd’s death, on May 27, showed “Umbrella Man” breaking out the windows of an AutoZone store with a sledgehammer. Some protesters asked him to stop.

Before that, the man spray-painted an expletive-laced phrase on the front doors, police said. The AutoZone fire was the first that firefighters responded to during the civil unrest, Assistant Minneapolis Fire Chief Bryan Tyner said Tuesday.

In the affidavit, Christensen wrote that she watched “innumerable hours” of video on social media platforms trying to identify the suspect with no luck. Then, a tipster emailed the Minneapolis Police Department identifying him as a member of the Hells Angels biker gang who “wanted to sow discord and racial unrest by breaking out the windows and writing what he did on the double red doors,” according to the affidavit.

An investigation found that the man was also an associate of the Aryan Cowboy Brotherhood, a White supremacist prison and street gang based mainly in Minnesota and Kentucky. Several of its members were in Stillwater, in eastern Minnesota, late last month when a Muslim woman was confronted by a group of men wearing White supremacist garb.