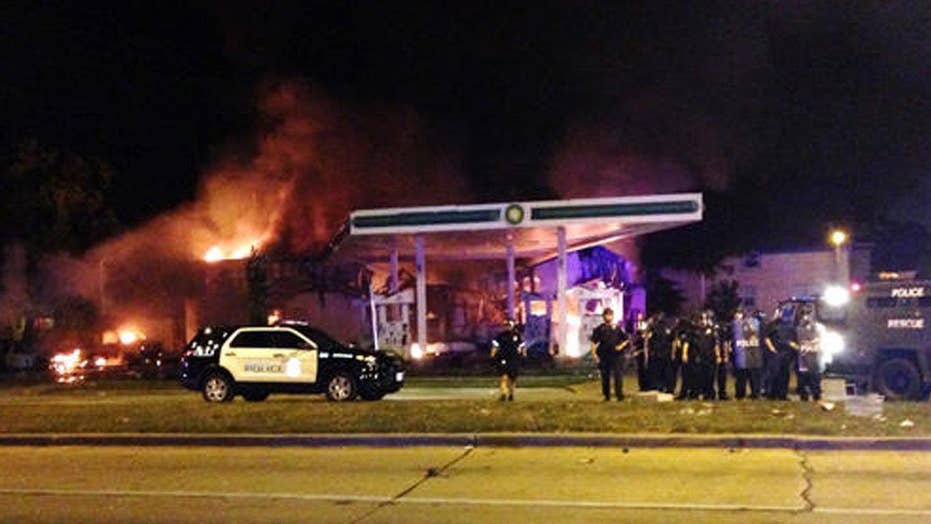 The man who was shot and killed by a Milwaukee police officer on Saturday – an incident which sparked a night of violet protests – is seen on body camera footage with a loaded gun in his hand, officials said at a Sunday news conference.

Sylville K. Smith, 23, was identified Sunday as the subject of a Saturday afternoon traffic stop that turned deadly when Smith allegedly ran from officers and then turned toward one with a gun in his hand.

Both Smith and the unidentified officer who shot him are black, Milwaukee Police Chief Edward Flynn said.

“The individual did turn toward the officer with a firearm in his hand,” said Flynn, later adding that Smith “was raising up with” the gun.

Flynn said he had viewed the body camera footage, which had not yet been released to the public. The entire incident lasted 20-25 seconds in Flynn’s estimation. While the camera captures the shooting there is no sound of the critical moments because Milwaukee police body cameras do not begin recording audio for 30 seconds, Flynn said.

Police officers could be seen on the footage administering CPR to Smith, who was hit in his chest and arm, Flynn said.

“It certainly appears to me at the time [the officer] made that decision it was a credible decision,” Flynn said of the decision to shoot Smith.

Milwaukee Mayor Tom Barrett called for the quick release of the body camera footage, which he said he had not seen. Barrett said he had seen a still photo extracted from the tape, however.

“That still photo demonstrates without question that [Smith] had a gun in his hand, and I want our community to know that,” Barrett said.

Barrett spoke directly to the community after a night of unruliness in which six businesses were set on fire. Police arrested 18 individuals – including four for burglary – during the melee and first responders tended to a 16-year-old woman who was shot and sustained non-life threatening injuries, Flynn said.

While there were no reports of police officers using force, Flynn said, four officers were injured. Three were struck by concrete and another by flying glass. One of those struck by concrete was a female officer who sustained a concussion and had a laceration that required seven stitches. All of the officers were treated and released from the hospital. Seven squad cars were damaged and a department BearCat was hit by eight gunshots – two to the vehicle’s windshield.

Milwaukee County Sheriff David Clarke saids a repeat of the violence that plagued the city Saturday night cannot be allowed to happen.

Clarke told reporters Sunday evening that violence will not be allowed to get out hand, citing Ferguson, Missouri, and Baltimore where rioting broke out after black men died during incidents there involving police.

Clarke added that he talked this Wisconsin Gov. Scott Walker earlier Sunday, and requested help should it be needed to keep the peace.

Smith was only identified Sunday afternoon, but already information about prior run-ins with police began emerging. Flynn said Smith had a “lengthy arrest record,” and The Milwaukee Journal-Sentinel reported that Smith had been charged with recklessly endangering safety and witness intimidation stemming from a February 2015 shooting. The charges were later dismissed for unspecified reasons, though prosecutors said they had recorded Smith asking his girlfriend to pressure a witness to the shooting to recant.

The 24-year-old unnamed officer who shot Smith was placed on administrative duty. He’s been with the Milwaukee department six years, three as an officer.